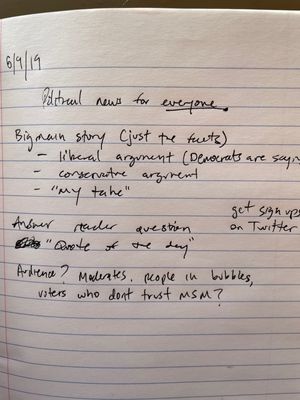 Nearly two years ago, I was in one of the darkest periods of my life.

I was struggling to find an outlet for my writing, struggling to find a job where I could report on politics, and unsure about what my future held as a writer and reporter. I was doing work that had nothing to do with my political knowledge or sources, and had no surefire career prospects. I’d been applying for jobs for nearly a year. I got seven interviews, several of which went to the “final rounds,” and zero offers. And then the interviews stopped coming, and every email sent to an editor hoping to “flag my resume” felt like an embarrassing waste of time.

The concept was fascinating to me. It was better than a blog, and different than the traditional, ad-littered newsletters I had become so tired of. It was an opportunity to create not just an audience — but a community of my own. The whole thing was built as a service to offer people premium content and then, one day, to ask those people to support your work financially. I loved the idea of being accountable to my readers and my readers only — not advertisers, or investors, not traffic and clicks, and not the rage machine of the comments section online.

I had so many ideas about what I wanted to do, but the very first one was a concept around a political news platform that got people out of their bubbles. My background put me in a unique position to pull it off: I grew up in a politically diverse county and had a lot of friends who were diehard conservatives and a lot of friends who were diehard liberals. I felt open-minded and politically incongruent myself. And as a result, I often saw the way these two groups loathed each other, and also how often they missed the common ground or simply misunderstood what the other side’s arguments were. I was tired of people dunking on each other on Twitter, taking each other’s words out of context, or elevating the other side’s worst arguments.

I thought maybe — just maybe! — I could participate a bit in changing that. And so I drew up this concept in my notebook:

I got some good feedback, along with some constructive criticism, so I kept plugging away. For the first eight months, I wrote Tangle every Monday through Thursday for free. Every day, I asked readers to tell their friends about Tangle, and every day the newsletter continued to grow, bit by bit. Throughout those eight months, I’d sprinkle in “special” Friday editions: deep dives, personal essays, interviews with people in the political world, something that got off the typical drumbeat of the daily news.

And then I told my readers I was going to put those Friday editions behind a paywall, and asked folks to begin subscribing. The response blew me away: about 15% of my readers took the jump from free access to become paying subscribers, and I started making a little extra money off of my writing. Off of something I had created from scratch — something that was entirely my own.

Today’s newsletter will go out to nearly 22,000 people in all 50 states and more than 40 countries outside the U.S.

It won’t be read by just my mom and dad and a few friends, nor will it be read just by everyday Americans, voters, and international readers interested in politics. It will be read by Congressional staffers on Capitol Hill and members of Joe Biden’s economic team and the Yang Gang pushing for him to be mayor here in New York City. It will be read by progressive activists and the leaders of pro-life organizations. Our subscribers include everyone from Ezra Klein to one of the founding editor of Deadspin, as well as reporters and editors from The New York Times, The Washington Post, The Wall Street Journal, Fox News, The Atlantic, TIME Magazine, Vox, The Washington Examiner, HuffPost, The National Review, The New York Post, CNN, ABC, CBS, and just about every other national newsroom you can think of.

And we’re getting noticed. Tangle was recently referenced in The New York Times, it earned me a spot on the Forbes Next 1,000 list as a burgeoning entrepreneur, and it is considered one of the primary success stories on Substack. It’s been promoted by The Hustle, Braver Angels, and a number of influencers and politicos who believe in what we’re building.

Throughout all this time, though, I’ve been working at Tangle at the same time as I did a full-time job as an editor. That means I’m up every day at 5 a.m. and usually working through dinner time. For almost two years, it has meant 12 to 14 hour days pecking away on the computer, working on Sundays, doing research, making phone calls, juggling this project alongside another job, planning a wedding, maintaining a relationship, and generally just trying like hell to have a life outside of work.

Then, over the last two weeks, the first wave of annual Tangle subscriptions re-upped, and to my absolute joy, I saw that almost all of those subscribers have stayed put. It appears this thing is worth the price of admission.

Seeing those subscribers hang around gave me confidence — confidence in the future of this project and the confidence to finally take the plunge and move into Tangle full-time. After nearly seven years at my job as an editor, I informed my team I’d be hanging up my cleats. And in return, I got nothing but congratulations and well-wishes.

My last day will be May 5th.

As I transition into Tangle full-time, I’m also hoping to do all the things I’ve been unable to get to for months (like catch up on sleep and maybe start that UFO newsletter I’ve been dreaming about). For the last month, we’ve been running a rewards program, where subscribers can earn points by sharing Tangle. Jewel from Cleveland, Ohio, won this month’s competition with 19 gifts sent and 12 gifts accepted. She got a $200 gift card that she’s going to use on her grad school text books. Brian from White Hall, Maryland, won the raffle with five entries (out of more than 500 total entries!) and received the $100 gift card. I’ll be reaching out to a few of the other top sharers about claiming their free swag in the coming days, and you can expect more of those competitions and reader engagement like this going forward.

Speaking of reader engagement: I also want to engage the Tangle community more directly. We’ve got early blueprints for Tangle events in the works, but for now, I wanted to make sure you knew about the comments section — which is exclusive to Tangle subscribers. You can find it (and archives of all our newsletters) here. Along with continuing to respond to reader emails, I’m going to try to point people to the comments, facilitate some more discourse, and allow Tangle subscribers to interact there as well. You can go straight to the comments section by clicking on the headline of any Tangle newsletter you receive in your inbox.

We’ve already got nine podcast episodes that are live, but we’re planning to get our first readings of the Tangle newsletter off the ground soon too, so all you audiophiles can listen to the daily newsletter instead of read it. We’ve (finally) got a mug order in after some delays with our distributor, and we’re going to have those in our merch store soon. We’ve also got a new partner in the pipeline — who will be offering any Tangle subscribers six free months of access to their news service.

But of course, more than anything, I just wanted to say thank you.

Thanks to all of my friends and family who made a bet on me in the very beginning, who trusted me enough to become subscribers and help me see this through. Thank you to all of you who stumbled into Tangle from Ground News, The New York Times, my viral election fraud thread, MKBHD’s podcast, my father’s Uber riders, or the folks who just saw a post about it on Twitter and gave it a shot. I say it often and I don’t plan to stop anytime soon, but this is my dream come true — and I’m incredibly grateful to be in the position you have put me in.

Thank you, especially, to all the readers who have written in frustrated by something I wrote, or criticized an argument I made publicly, or left a compelling comment to push back on an idea I had. I mean this genuinely: it has made me better. And it continues to be one of my favorite parts of Tangle. As with most Americans, I am still learning, evolving, and encountering new ideas. I am doing my best to keep an open mind and an open heart, and every email exchange or Twitter argument or conversation over a beer helps make me a more empathetic and more knowledgeable person. Best of all is that facing and examining your criticisms, sharing them in my newsletter, and meditating on them, has made me a more expansive thinker.

And I can’t wait to take this project to the next level.

Nearly two years ago, I set out with a dream to create a kind of political news that had a sort of higher purpose: something that avoided clickbait, sensationalism and intentionally polarizing language. Something that was less divisive. Something that elevated the strongest ideas, the most diverse set of arguments, and not just the loudest or most controversial. Something that got people out of their echo chambers and gave them a chance to engage with and understand beliefs they may not have otherwise come across. I didn’t know if it would work, but it did. It’s working. This kind of news is winning people over, and we’re going to keep grinding.

All this means I need your support. If there was ever a time to subscribe, this is it. I just cut the cord from those regular paychecks and put all my chips on the table to make this work. As always, you can subscribe to Tangle for just $5/month or $50 a year, which comes out to less than a dollar a week. If you want to throw some extra support behind this project, you can also become a founding member, which is $199/year and gets you quarterly updates on the business, previews of forthcoming products, and is a way to help ensure the longevity of what we’re building. If you want subscriber access but you can’t afford it right now, just reach out and let me know. We’ll set something up.

We’ll be back in your inbox tomorrow, and looking forward to an incredible year around the corner.