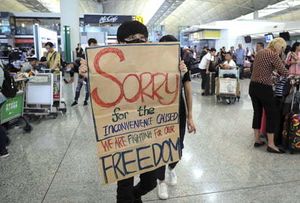 Forward this email to a few friends, or share this link on social: /

Did someone forward you this?

They’re asking you to subscribe. It takes less than three seconds.

China, a third-party candidate and how our kids are being radicalized.

China. Things are tense on all fronts. Protesters in Hong Kong disrupted one of the biggest airports in the world this week, and President Donald Trump’s trade war is getting complicated all at the same time. Until recently, the protests were mostly peaceful. That seems to be changing. Lots of readers have written in asking what’s going on in China. Here’s what you need to know.

It’s complicated. Some more traditional Republicans are taking a sharp tone and supporting the protesters. Reminder: Communism and Republicans don’t go well together. China is the actual living embodiment of the socialist state that Republicans warn is coming from the likes of Bernie Sanders or Alexandria-Ocasio Cortez, so it’d be pretty hypocritical for them not to stand up and speak out against China. But there’s this little problem called Donald Trump. He and China’s president get along pretty well, and Trump is walking a tight rope as China and the U.S. negotiate their trade qualms. Trump is being careful, and has expressed tepid support for both the protesters and the Chinese government. That’s irked Democrats and Republicans. On Tuesday, he tweeted these not very calming words: “Our Intelligence has informed us that the Chinese Government is moving troops to the Border with Hong Kong. Everyone should be calm and safe!”

The President needs to speak out in support of the protesters. Hong Kong is fighting for Democracy, putting life and limb on the line in the streets, and now would be a great time for America to show some love. Sen. Elizabeth Warren, who could very well be dealing with China as president in a few years, said “The people of Hong Kong are making clear that they will not tolerate repression, and their movement affirms: The power is with the people. They deserve our support and the support of the world.” House Majority Leader Nancy Pelosi said Trump should walk away from his statements about Hong Kong. “If America does not speak out for human rights in China because of commercial interests, we lose all moral authority to speak out elsewhere.”

I try to avoid taking too strong of a stance and I firmly believe there are more than two sides to most issues. But this one isn’t hard. America either stands for liberty, freedom and justice or it doesn’t. Trade negotiations don’t trump that. There’s nothing wrong with mainland Chinese people, but there is plenty wrong with the mainland Chinese government. It’s using mass surveillance to crush dissent and oppress minorities, and now it’s sharing that mass surveillance tech with other countries so they can do the same. It’s imprisoning millions of Muslims and forcing them to violate their own religious beliefs. China’s crimes against humanity are numerous. The people of Hong Kong — and, for the most part, the government there — are a beacon of freedom in a region with little of it. America should stand in solidarity with the protesters.

Earlier this week, Tangle covered the job fair in Mississippi to replace the deported undocumented immigrants from the Koch Foods factory. Reminder:

“The news poses a real-life case study for two opposing views in the immigration debate. For decades, immigration restrictionists have claimed that undocumented immigrants have stolen jobs that would otherwise go to Americans. Pro-immigrant activists have responded to this claim by saying that undocumented immigrants often take less-desirable jobs that American workers don’t want and ultimately contribute to the economy by paying taxes.”

Tangle checked back in. According to the Clarion Ledger, 25-30 people showed up the jobs fair, which is aiming to replace about 680 workers. You can read more here.

Reminder: Tangle is about repairing the relationship between reporters and readers. Simply reply to this email to submit a question and I’ll get to it in an upcoming newsletter.

Q: Is it realistic (any time soon) for a third political party to gain serious steam and become a main political party, or overtake either the dems or reps? I want to hope for that to happen, but it seems unlikely. I just don't know what would have to happen for that to be possible -- obviously a majority of supporters, but what political/bureaucratic hurdles would have to be overcome to get there?

Tangle: I love this question and I’m surprised you’re the first person to ask it. The third party question is an important one, and it seems like it comes up during every election. You could make a case that the 2016 presidential election was swung in Trump’s favor by third party voters in key states who punched a ballot for Gary Johnson or Jill Stein instead of Hillary Clinton or Trump.

To answer your question directly: No, I don’t think it’s possible for it to happen any time soon. That being said, since it looks like you’re fishing for a little hope, I’ll offer the enthusiastic signals a serious third political party or candidate could disrupt the two party system we have now.

For one, Sen. Bernie Sanders is technically an independent and he’s one of the most popular politicians on the planet. His party affiliation is meaningful and he frequently targets Democrats with his ire along with Republicans. I had a friend who once said that “Bernie Sanders and Donald Trump are not at 9 and 3 o’lock, they’re at 10 and 2 o’clock.” His point, in essence, was that Sanders and Trump are a lot closer to each other than we often think about them in our two-party minds. And he’s right. Bernie’s anti-establishment, anti-some-Democrats, anti-most-Republicans stance is proof that a third party positioning could gain momentum. There’s also Bill Weld, the old-school Republican gearing up to challenge Trump. He’s got the support of all the never-Trump Republicans. While POTUS enjoys a ton of support amongst registered R’s, it seems like as the days go by he is losing more people than he’s gaining. The Trumpism takeover of the party is complete and won’t go away, but as Republicans retire in droves and big names in the party like Jeff Flake, Justin Amash, etc. publicly criticize POTUS, moderate Republicans seem to be carving out their own third party placement in the political lexicon. Right now we call them “never-Trumpers” but, who knows, maybe in 5 years they’ll be “independents?” Then, there’s also the fact that younger Americans are increasingly reluctant to identify with a political party. Most young Americans lean left and far more identify with Democrats than Republicans, but the reluctance is real. Some 30 years ago, if you asked someone whether they were a Democrat or Republican, and the answer was usually straightforward. Ask a young American now, and it’s a lot more complicated. That leaves the door wide open for a new political party or an independent coalition to grow and court those voters — but it will take decades.

As for the obstacles to overcome, they’re numerous. Most notably is the way our elections work. Sen. Sanders runs as a Democrat, despite being an independent, because he needs the full force of the party behind him. He needs endorsements, donations, email lists and structural support from organizations built to win elections. And, for now, those organizations almost exclusively operate to elect Democrats and Republicans. There’s also the simple fact that most people identify and vote with the party they inherited from their parents. That could be changing in the next generation, but it’s a fact of life that you are predisposed to support the politics of the house you grew up in. Most conversations are still happening in the parameters of Democrats and Republicans, so most of the next generation will grow up thinking they have one of two sides to pick.

All of this being said and considered, I do think one charming, good-looking, charismatic candidate with a good resume and a few killer ideas could break through running as an independent. Grassroots donations through the internet make it a lot easier to win elections for just about anyone who can make a viral video, so who knows — maybe an indie candidate is planning their next move right under our noses?

Joanna Schroeder, a writer and mother with a following on Twitter, shared a story about how she caught her son being radicalized online. She says social media vloggers are laying the groundwork for young, white teenagers to be woo’d by the alt-right and white supremacy. To me, it sounded absurd on the face of it. But as I read through her Twitter thread, I found it convincing. Here are the first few tweets. You can click in to read more.

Seven months ago, Hugh Hewitt was on MSNBC and told viewers that Trump will unite America by sending forces to Venezuela and overthrowing Nicolas Maduro. We’re seven months later and… how’s that working out?

If you’re enjoying this newsletter, please forward it to a few friends, retweet the tweet below, or simply post and send this link around: /