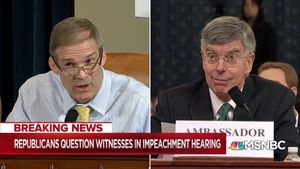 This is an excerpt from Tangle, an independent, ad-free, non-partisan politics newsletter where I answer reader questions from across the country. If you found Tangle online, you can subscribe below.

Q: How can the White House continually block people that were eye/ear witnesses to what happened? The whole point of this system is to give a public view on what happened, yet it seems like the GOP is still controlling the narrative and keeping it as a “Game of Telephone” so that no real witness can speak up. Is this standard protocol? Can the White House really stop the hearing from calling on the correct witnesses? Is there no way to subpoena them and force them to speak? And if the White House tried to stop Taylor and Kent from going under oath, why did they fail at stopping it?

Tangle: I’ve gotten a few different versions of this question from several different readers. It’s also something I see on Twitter a lot: “how can people just ignore subpoenas?” First off, I should note that the only reason Democrats can compel so many people to testify is because they have the majority in the House of Representatives. Without that, they’d be almost entirely stonewalled. That has been, so far, one of the biggest outcomes of the 2018 election. It’s also one of the reasons I often advocate for a “divided” government, with mixed control between the White House, the House and the Senate; it creates more accountability, even if the sacrifice is sometimes gridlock.

Ukraine ambassador Bill Taylor testifying before the House of Representatives.

What’s happening here is that State Department officials like George Kent or Bill Taylor are first obligated to obey the department’s orders. So the State Department, on behalf of the White House, asks them not to testify. Then Congress subpoenas them, which trumps the State Department request (pun intended). At this point, Kent, Taylor or whoever else can use the subpoena as cover and testify, saying that they don’t want to be in defiance of Congress. The subpoena gives them the legal rationale to disobey the State Department.

Once subpoenaed, people often negotiate the terms of their appearance in front of Congress. But if they decide to disobey a subpoena, Congress only has a few options to enforce it. The favorite of political firebrands is to call the Sergeant-at-Arms to detain a person who is defying a subpoena. Sergeant-at-Arms detention hasn’t happened since 1935, and it’s a pretty archaic and unlikely outcome. Another option is to fine or try to jail someone defying a subpoena (the maximum penalty is $100,000 and a year in jail). That requires pursuing criminal contempt charges and would mean a U.S. attorney for the Justice Department is bringing a case forward. Given that the Justice Department is controlled by William Barr, a Trump appointee, this is unlikely. Another possible outcome is that Congress files a civil suit, which sends the case into the court system and gets a federal judge’s weight to enforce a subpoena. This is perhaps most common, but it takes awhile.

Instead of these options, Democrats have pursued another method: they’ve simply taken the defiance and made it part of their case that Trump and his allies are obstructing justice. It’s quite likely they will add obstruction to the articles of impeachment and use it to define Trump and his administration in criminal terms when they vote on impeachment. The reason for this is twofold: one, they believe this is more damaging to Trump’s presidency. Two, they are probably wary of any of the other options. Like I said, a civil suit could take months or years for a court to sort out. The Justice Department would never bring a case forward. And deploying the Sergeant-at-Arms would be a significant escalation, especially given the fact Democrats are sometimes the ones defying subpoenas.

In sum, there is a lot of political and legal calculation here. There are ultimately levers that the Democrats could pull, legally, to force people into testifying or to punish them with fines and potentially even detention. But instead of pulling those levers they are opting to use the defiance as evidence for obstruction, which could be a shrewd political move, even if it lets some witnesses off the hook temporarily.

You can subscribe to Tangle by clicking the button below. Every Monday-Thursday, I send out a newsletter telling you what each side is saying about the big story of the day. I also answer reader questions, give you some “good news” and tell you about a story that matters which hasn’t gotten enough coverage. You can read more Tangle here.