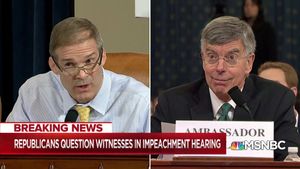 Tangle is an independent, ad-free, non-partisan politics newsletter where I answer reader questions from across the country. If you found Tangle online, you can subscribe below.

Today’s Tangle is a little longer than usual. I’m breaking down the first day of impeachment hearings, answering a question about the U.S. troop presence overseas, covering a story on “superbugs” and updating you about a new presidential candidate. There’s a lot of important stuff going on.

Ukraine Ambassador Bill Taylor (right) reacts to a line of questioning from Rep. Jim Jordan (left) during the impeachment hearings on Wednesday.

Tangle hits your inbox Monday through Thursday, around lunchtime. That means there won’t be a newsletter tomorrow unless some really big story breaks. Everyone deserves the weekend off from politics, except me. Enjoy it! I’ll be back on Monday.

(About politics). Tangle thrives on reader questions — it’s the lifeblood of the newsletter. My goal is to help you understand what’s happening and make sure you don’t have to waste time wading through the news to find the information you want. Submit a question by simply replying to this email or tweeting at me @Ike_Saul

Day one of the public impeachment hearings is in the books.

You can read more about that new phone call here.

Inside the room, Republicans leaned on a few key defenses:

Outside the room, the right attacked Kent and Taylor from a few different angles:

Some ignored Kent and Taylor, instead focusing on the fact Democrats began pushing this Ukraine story after Robert Mueller’s testimony on the Russia election interference scandal, which many people viewed as a “bust.”

Inside the room, the Democrats focused on the timeline of events and the multiple corroborating stories.

Outside the room, the left saw two witnesses who were credible and convincing.

Yesterday was an unsettling reminder that the country is simply operating on two different sets of facts. On Fox News, Sean Hannity boasted that it was a “great day for the United States” and a “lousy day for the corrupt, do-nothing-for-three-years, radical extreme socialist Democrats and their top allies known as the media mob.” On MSNBC, Rachel Maddow delivered the solemn news that new details emerged “about the actions of the president and him directing this scheme personally.”

If you’re on the left, yesterday was about two credible witnesses coming forward and explaining the impeachable offense of a president trying to get a foreign leader to investigate his top political rival. Those witnesses appeared under oath with damning testimony despite the fact they are non-partisan diplomats who the White House tried to stop from appearing.

If you’re on the right, yesterday was about the Democrats continued efforts to undermine the will of the American people and reverse the results of the 2016 election. This is just a sequel to the “Russiagate collusion hoax,” and the two witnesses have never spoken to the president and were operating on nothing but hearsay. The Democrats know they can’t win the 2020 election, so this is their plan to upend Trump’s presidency.

Taking a step back, yesterday — and the coverage that has followed it — is exactly why I created Tangle. I’m glad to have this platform to present what each side is saying and I hope you continue to use this newsletter as a resource for well-rounded news.

Tomorrow, the former Ambassador to Ukraine, Marie Yovanovitch (who Bill Taylor replaced after she was fired), will testify publicly. Next week, eight more witnesses are scheduled to testify privately and publicly.

Reminder: Tangle is about answering reader questions from across the country. I’ll tackle just about any question related to politics that you send in. To ask something, simply reply to this email.

Q: Could you talk about where U.S. troops are deployed and why they are there? Being completely honest, I don't know how many troops we have stationed across the world and the reasoning behind it. Are most of the deployments partisan/contentious?

Tangle: This was a really fun question to research, as I had a vague idea of the answer but wasn’t sure of it off the top of my head. I imagine the U.S. military presence being enormous, but it was even bigger than I thought. Here is the top-level information: there are about 800 U.S. military bases across the world, and that’s after hundreds of bases in Iraq and Afghanistan were shut down in recent years. Those bases span more than 70 countries and territories abroad, about 40 percent of the world’s nations, and vary in size from huge presences to smaller facilities for intelligence operations. We have 1.3 million active-duty members of the military, and in the last few years, anywhere from 200,000 to 450,000 of them have been stationed overseas.  The New York Times estimates that there are 200,000 active-duty troops abroad, and Business Insider said there were about 450,000 active-duty members of the military abroad in 2017 (this high-end estimate includes members of the military who are not combat soldiers, like Navy fleet personnel and airmen). By comparison, Britain, Russia and France have just 30 foreign bases combined. The true number of military members overseas is tough to pin down, due both to classified operations and shifting strategies that bring troops home and send troops abroad (you might remember that Trump just announced an 1,800 troop deployment to Saudi Arabia, which would significantly change the troop count abroad).

The best source I found on our bases came from David Vine, a professor at American University who published the book Base Nation: How U.S. Military Bases Abroad Harm America and the World. A lot of this information is from 2015, which means it doesn’t include recent deployments to Saudi Arabia or the Syria withdrawal, but I found that it still lined up with more contemporary sources. Here is a graphic from Vine’s research, produced by 5W Infographics, that was published in Politico:

As far as I can tell, these deployments are almost entirely bipartisan. One of the big critiques from the left and from pro-Trump conservatives of both the Republican and Democratic parties is how often they participate in expanding the military’s presence and funding. Both liberals and conservatives on each side view the “establishment” as being unabashedly pro-war, and often point out how increasing our military presence is one of the few things that gets done in a bipartisan fashion.

Given the size and scope of these deployments, I could write a book to answer your question about why we are in these places (as Vine did). But I’ll try and sum up some of the issues these deployments are related to, which I’ve pulled together from about a half-dozen news articles and research papers about American deployments.

We are in active conflict in seven countries. U.S. military journalist Ben Watson, who served in the Army and writes for the military news site Defense One, says we have conflict operations in Afghanistan, Iraq, Syria, Yemen, Somalia, Libya and Niger, all under the same authority granted in the 2002 authorization to fight al-Qaeda linked militants. We have 78,000 troops in Japan and South Korea, troops that have been there since the end of World War II and the Korean War. These troops are mostly there to keep a presence in the region and perform military exercises with South Korea, as North Korea remains a global threat and adversary. There are some 35,000 troops across Europe to help defend against Russia, down from the 300,000 that were there in the wake of the Cold War and battles against the Soviet Union. In Saudi Arabia and across the Persian Gulf, there are between 45,000 and 65,000 soldiers who are operating in large part to respond to aggression from Iran, a nation that has allied with Russia and is also viewed as a nuclear threat that poses an imminent danger to Israel (there’s also a whole lot of oil defense going on). Outside of these major presences, there are thousands of troops in smaller groups deployed everywhere from the Philippines to Honduras and Chile. Some of those bases consist of fewer than 200 military personnel. In many cases, the U.S. military defines those presences as related to counterterrorism operations, though skeptics of the military believe they are there to gather intelligence, monitor political situations and maintain a dominant western eye on what’s happening across the world.

Yesterday, under the wave of impeachment news, former Massachusetts Gov. Deval Patrick announced he was joining the 2020 Democratic presidential primary. Patrick is a Chicago transplant who has a close relationship with former President Barack Obama and is often compared to him. He focuses on upbeat rhetoric about repairing the political divisiveness in America and is generally moderate on the major Democratic issues of the day. His campaign announcement is being viewed in a similar light as Mayor Michael Bloomberg’s presidential prospects, which is that he believes he is a moderate who can beat Warren, Sanders, and Trump, unlike Joe Biden or Pete Buttigieg. You can view his campaign video below or read about his political history and scandals from the New York Times here.

Deadly, drug-resistant “superbugs” pose a greater threat to Americans than previously thought, according to a new report from the Centers for Disease Control and Prevention (CDC). The Washington Post reports that these superbugs cause 3 million infections and more than 35,000 deaths each year, and scientists are baffled as to how they can stop them. Doctors have warned of the threat of antibiotic-resistant bacteria, fungi and germs for decades, but it appears their fears are finally coming to fruition. A just-released CDC report depicts a much larger problem than medical professionals previously understood. You can read more from WaPo here.

Have a nice weekend.

There is no cure for Parkinson’s disease, but a woman in Scotland has the remarkable talent of being able to smell it on patients. For nearly a decade, Joy Milne’s nose has been under scrutiny. Many people didn’t believe her claims, but doctors have vouched for the nurse’s ability to sense the disease on people. Now, a chemist and researchers from a team in Manchester are trying to use her unique superpower. After all, smells are made up of molecules, and molecules can be measured and detected. The researchers believe if they can teach a machine to smell like Milne, they can detect Parkinson’s at an earlier stage and significantly improve health outcomes for people who develop the disease. Der Spiegel has more on this remarkable story here.