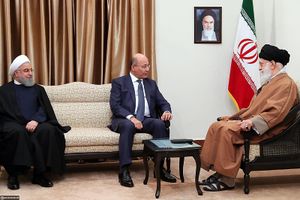 I’m Isaac Saul, and this is Tangle: an independent, ad-free, subscriber-supported politics newsletter that summarizes the best arguments from across the political spectrum — then “my take.”

In every Tangle newsletter, we answer reader questions from across the country and the globe. Every now and then, I like to pass on reader questions to people who are experts in their field. For today’s question, I turned to a friend and expert on Iraq: Ben Van Heuvelen, who is the managing editor of Iraq Oil Report.

Q: If Biden does pull out of Iraq, is it not likely that we will see the same kind of deterioration that we're witnessing right now in Afghanistan? Isn't it better to officially end active combat operations while leaving a small but visible force, to act as a deterrent against a resurgence of terrorism in the country? We can't "win" in Iraq but we can help keep the peace just by being present.

Ben Van Heuvelen: To answer the question, it might be helpful to start by highlighting some differences between Iraq and Afghanistan. If you had asked a good journalist in Kabul back in April, “What's the worst-case scenario for a U.S. withdrawal?” I think the answer would have been: “The government falls to the Taliban.” If you ask a good journalist in Baghdad, “What's the worst-case scenario for a U.S. withdrawal?” nobody today would talk about the collapse of the government. Even though there are some remnants of ISIS fighting an insurgency in some rural and desert areas, they number in the low thousands and they can't control any territory. The Taliban, by contrast, have something like 75,000 fighters and already controlled parts of Afghanistan before the U.S. decided to leave. So the stakes are different. The Iraqi government would not collapse without the U.S.

But that doesn't necessarily mean the U.S. should disengage. The biggest strategic benefit of a strong U.S. presence is to serve as a bulwark against Iranian influence in Baghdad.

What does that mean, exactly? I'll give one concrete example. Among the many different types of security forces in Iraq, there are dozens of paramilitary groups that are simultaneously funded by the Iraqi government and affiliated with political parties, tribes, and/or religious identity groups. Many of these paramilitary groups have also been trained and (to varying degrees) are controlled by Iran. So it is reasonable to worry that these groups are becoming a vehicle through which Iran can control Iraq. For example, let's say the prime minister wants to make a big decision that Iran won't like — a powerful Iranian or Iran-aligned politician in Baghdad might visit his office and say something like, “I don't like that trade deal you're thinking about signing... and it would be a shame if something happened to your uncle or your sister.” What protection does the prime minister have against that kind of blackmail or extortion?

Right now, the answer is that the prime minister directly commands the Iraqi Army and state intelligence services, many parts of which have been trained by the U.S. and cooperate closely with the U.S. military. These forces are not powerful enough to eradicate the lawless paramilitary groups by force. But they are currently powerful enough to deter Iran-backed armed groups from completely compromising the sovereignty of the elected government in Baghdad. If the U.S. military were to withdraw from Iraq entirely, the U.S.-backed elements within the Iraqi security forces would probably lose capacity over time, and the balance would tilt more in the favor of the Iran-backed armed groups. It would become harder for anyone in a position of power to trust that they can defy the wishes of Iran without risking their livelihood or personal safety.

If I were President Biden, the questions I'd be asking my national security team would be: “What is the strategic benefit for the U.S. to ensure that Iraq remains balanced between us and Iran? And, do those benefits justify the costs? Can we achieve a similar benefit with a smaller footprint?” Etc. For now, their answer seems to be that it's worth keeping a military presence of a couple of thousand troops, in addition to a massive embassy.

This is an excerpt from Tangle, an independent, ad-free, non-partisan politics newsletter that summarizes the best arguments from the right and left. To sign-up for Tangle, and submit your questions, enter your email address below: