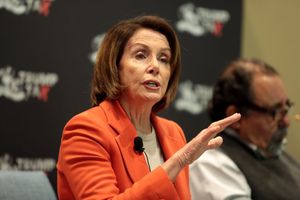 This is an excerpt from Tangle, an independent, ad-free, non-partisan politics newsletter where I answer reader questions from across the country. It comes out every Monday-Thursday, around lunchtime (EST). For more news like this, subscribe below.

Q: Why isn’t the House signing the USMCA?

Tangle: The United States-Mexico-Canada Agreement, also known as USMCA, is Donald Trump’s plan to replace the North American Free Trade Agreement (NAFTA), which both far-left Democrats like Bernie Sanders and Trump-like Republicans have railed against. Even though most Democrats prefer USMCA to NAFTA, they have dragged their feet on passing the new trade deal, mostly over specifics on how enforcement of new regulation would work. The deal has been signed by the U.S., Canada and Mexico, but now needs to be ratified by Congress. Perhaps the biggest change from NAFTA in the USMCA is around car manufacturers, especially those on the border in Mexico near Texas. 75 percent of an automobile’s components must have their parts manufactured in Mexico, Canada or the U.S., up from 62.5 percent under NAFTA. But more importantly, 40 to 45 percent of those parts must be made by workers who are earning at least $16 an hour by 2023.

That labor provision, which is essentially a minimum wage for almost half of the automobile industry’s workers in Mexico, is very contentious. Democrats have said they won’t sign onto the deal until there is a satisfactory enforcement method to ensure those laborers are being paid the $16 an hour minimum wage. Democrats have suggested enforcement via factory inspection, an idea that has been rejected by many Mexican officials and U.S. Republicans. Other Democrats in Texas have expressed concerns about security on the highways between Mexico and the U.S., and have said that they won’t sign the deal until Mexico commits to increasing security along those routes.

Other top issues for Democrats include regulating cross-border pollution and reducing Big Pharma drug prices. Both Fox News and POLITICO have reported in the last few days that the areas of concern for Democrats has shrunk dramatically in the last few weeks, and a deal is close to being cut. Richard Neal, the House Ways and Means Chairman, told POLITICO “a lot” of issues were figured out and he was feeling “pretty good” about the odds of the trade deal passing. Both Democrats and Republicans have a lot of motivation to get the deal done. For Democrats, passing USMCA would prove they can walk and chew gum at the same time, both investigating POTUS and handing workers a win across North America. For Trump and Republicans, passing USMCA would be a significant policy win that allows Trump to tell voters he fulfilled his promise of getting rid of NAFTA (even though the trade deals are very similar).

My guess is USMCA is ratified by the end of the year, given that Democrats don’t want to give credence to Trump’s accusations that they’re “do-nothing” politicians. But there are significant barriers to it passing, mostly around the finer points on enforcing the deal, and this kind of legislation always takes a lot of time and give and take.