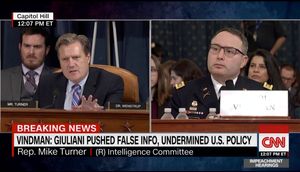 The new Israel policy, the origins of the Joe Biden story and a brief impeachment update.

Witnesses are testifying in the impeachment inquiry into President Donald Trump. You can watch on television or stream it online. So far, the lead story is that Lt. Col. Alexander Vindman has testified that the White House demanded improper investigations and explicitly conditioned them on U.S. funding and a presidential meeting. Also…

Israel. Yesterday, Secretary of State Mike Pompeo announced that Israel’s West Bank settlements do not violate international law, a move he claims “increased the likelihood” of a Middle East peace plan. Reminder: the West Bank is an area Israel took over from Jordan after The Six-Day War in 1967. Millions of Palestinians live there, and Israelis have since built settlements inside the region. In the 1970s, U.S. policy was the settlements were illegal. Reagan publicly changed that stance in 1981, but never reversed previous memos calling the settlements illegal. Since then, presidents have tip-toed around the issue like a landmine, calling the settlements “illegitimate” or “irresponsible” but rarely illegal or legal. The European Union and pretty much every other international body says the settlements are illegal and that they harm any longterm prospects of peace in the Middle East.

This latest move is viewed as a needless provocation, perfectly in line with Trump’s treatment of Palestinians thus far. He already took the controversial steps of recognizing Jerusalem as Israel’s capital, recognizing Israel’s sovereignty over the Golan Heights, moving the U.S. embassy to Jerusalem and naming an anti-Palestinian ambassador to Israel. Because expanding settlements is a non-starter for the Palestinian side, this effectively ends any negotiations that might happen for a two-state solution or a peace plan. While Trump and Jared Kushner have repeatedly claimed they were going to unveil a plan to solve the Israeli-Palestinian crisis, it has been repeatedly delayed while antagonistic moves like this are announced. As a result of this move, Israeli’s right-wing parties will feel emboldened to ramp up settlement building in the West Bank, which will undoubtedly cause conflict, tension, and probably violence in the area. In the meantime, Palestinians in the area will be unable to live normal lives, with communities separated by Israeli settlements and security that they say makes living independent lives impossible.

I just want to start by acknowledging my own biases here. I’m a Jew, I’ve lived in Israel, I happen to love Israel, and I know that it’s impossible to view issues like this without starting from that perspective. It’s part of the reason I made Tangle — to be able to include my personal perspective along with my own reporting and analysis while giving other people’s thoughts, too. If any of my readers are Palestinians, Muslims, or have lived in the West Bank, I’d love to hear and share your thoughts.

All that being said, I don’t land in some pro-Israel or Zionist stance here (I’m not a Zionist and I have plenty of gripes with Israel’s government). My honest reaction is that this move will do nothing to advance the peace process and is almost entirely political. As we speak, Netanyahu is in the fight for his life to keep a stranglehold on Israel’s government, and Trump basically just gifted him a policy win for his far-right base. By doing this now, Netanyahu can try to form a right-wing government coalition that will be energized by the prospect of expanding Jewish settlements in the West Bank. It also comes at a fraught time for Trump, who is underwater in national polls and in the middle of an impeachment fight. Staunchly pro-Israel policies do him a lot of favors with Evangelicals and other American Christians, and this will surely be pumped across the airwaves as just that (ironically, most American Jews do not support this policy).

The plan also puts Israel in a precarious place. If the settlements are expanded, and Israel claims sovereignty over the West Bank, then it has to incorporate the Arabs who live there as citizens. If it does that, though, then Jews could be in the minority. And if it doesn’t do that, Israel will look a lot more like an apartheid state with second-class citizens. Really, though, little more needs to be said than the State Department advisory that went out hours after the announcement was made. The U.S. government warned Americans traveling to Israel that “Those opposed to the Secretary of State’s announcement may target US govt facilities, interests, and citizens.” Of course we — and Israel — should not holster policy decisions because we think extremists may react to them violently. But shouldn’t a policy decision that’s supposed to advance the prospect of peace not come with a warning that it might immediately cause violence?

Reminder: if you want to ask a question, all you have to do is reply to this email and write in.

Tangle: I think the biggest reason is social media. A friend of mine once said that the worst thing about Facebook and Twitter was that “it made a bunch of idiots experts on things.” I’m not quite so cynical, but I think the thought there is at least relevant. Social media has empowered a lot of people to speak more openly about their views and to opine on politics in public. It doesn’t require any face-to-face debate or frankly any inherent knowledge about what you’re talking about. When political debate on Facebook was first getting popular, I realized a lot of friends I was talking to would be Googling things as they argued with someone online. That realization came when I’d try to engage in similar conversations in person and realized that the same people citing figures and historical information on Facebook suddenly couldn’t think of basic political information.

Interestingly, there isn’t a ton of data on whether this experience you’re describing (which I have also observed) is anecdotal or backed up. I couldn’t find a survey about people’s feelings evolving on sharing their politics publicly, but I did find a Pew study that found 52 percent of Americans would feel very or somewhat comfortable talking about politics with someone they didn’t know well, which is higher than I expected. I also found this graph, which illustrates how the left’s stress discussing politics with people they disagree with has gone up in the age of Trump.

Still, politics is towards the bottom of the things people want to talk about, ahead of pretty much nothing except how much money you make in a year. Aside from social media, I think the other two driving factors are the celebrity status of Obama and Trump along with the 24/7 news cycle. Both Obama and Trump consumed our culture in a way that I think people felt societal pressure to have an opinion. And once that pressure was felt, the 24/7 news cycle — on television, radio, social media, digital publications and podcasts — has made it easy for people to find information quickly and offer their own opinions.

As for whether it’s “good” or not, I think that question is tricky. On one hand, I have some pretty grave concerns about the way society has begun to shun, discredit and doubt experts in their fields. I see it all the time on Twitter and Facebook, and especially in covering Donald Trump. Watching a restaurant owner from Florida explain to NASA climatologists why their model is wrong on Twitter is exceedingly frustrating (and scary), just as watching a climatologist try to tell a restaurant owner how to turn a profit would be absurd and stupid. But social media has helped bring that world front and center — a world where the political analysis of people on social media is sometimes weighed equally as that of a seasoned reporter, so long as it’s brought forward in a funny or snarky or mean way that promotes shares and likes.

On the other hand, people sharing their political views openly encourages debate and conversation. I think a lot more people are tapped into politics today than ever before, mostly because there is so much accessible information and the presidency has become incredible entertainment (to put it in the most positive light possible). The societal pressure that forces people to have an opinion also forces them to educate themselves so they don’t look stupid when they share that opinion publicly. Naturally, given the amount of disinformation online, sometimes people’s efforts to learn or inform themselves backfire. But the discourse, to me, is important — and I do believe the benefits of that discourse far outweigh the negatives. We don’t really have a Democracy if people aren’t participating, and the only way people are going to participate is if they care enough to engage and form their own opinions. I think the fact people are sharing those politics more openly now than ever before is a sign that political engagement — and perhaps even voting rates — will rise, and that ultimately is something I’m happy about.

One of the most important stories happening in America right now is the proliferation of fake news and conspiracy theories. The top story in D.C. right now is impeachment, and one thread of impeachment is the allegations that former Vice President Joe Biden was acting corruptly in his dealings with Ukraine. This, Republicans and Trump have both claimed, is why the president was concerned about opening an investigation into Biden and Ukrainian corruption. But the origins of that story actually begin with John Solomon, a seasoned reporter who was apparently working at the behest of Trump’s personal lawyer Rudy Giuliani. ProPublica has published a fantastic piece on how Solomon worked, how the story started, and how many people have fallen for it. It’s educational. You can read it here.

Bill Gates secretive energy startup says it has successfully used artificial intelligence and a field of mirrors to reflect so much sunlight it can generate heat above 1,000 degrees Celsius. That’s roughly a quarter of the temperature on the surface of the sun (read: very, very, extremely super hot). Their announcement means that they can concentrate enough solar heat to make things like cement, steel and glass, which would be big news for industrial plants. Right now, those industries emit so much carbon it’s estimated they account for more than a fifth of all global emissions. Cement alone accounts for 7 percent. You can read more about their invention here.