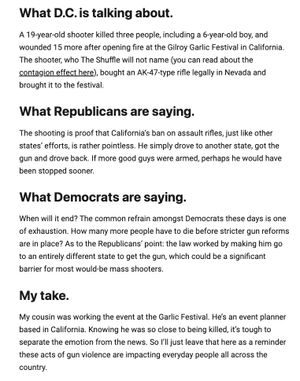 I had named the newsletter “The Shuffle.” The subject line read: “Does it matter yet?” and the topic was the shooting at the Gilroy Garlic Festival. On the mailing list were my parents, my then-girlfriend (now wife), my college roommates, and a few friends from my ultimate Frisbee team. Nobody had ever heard of Covid-19, Donald Trump was still president, and Joe Biden was fighting for his life on the campaign trail. The main sections of the newsletter were so short I can screenshot them and place them here:

A couple of days later, I sent my second newsletter. That one was about the Democratic debates, was a bit longer, and came under the now official name “Tangle.” I remember the early days of trying to decide what to call it, and asking my closest friends to subscribe and tell me what they thought. The text messages, now, are really fun to look back on:

As Tangle slowly grew outside of my social circle, I started hearing back from readers who were strangers; teachers in Dallas, doctors on the Upper West side, firefighters in southern California, police officers in Illinois, the wives of police officers in Florida, activists in Chicago, suburban dads in Oregon, peach farmers in Mississippi (not kidding), ranchers in Texas, high school students in Colorado, college basketball players in Atlanta, park rangers in Alaska, and everything in between. Slowly, the emails started coming in from Switzerland, France, Algeria, Israel, Spain, China, Hong Kong, Chile, New Zealand, India and The Netherlands. An Olympic skier signed up. So did some famous journalists, some of my writing idols, and then staffers for Republican and Democratic politicians.

On August 8th, 2020, a user signed up from Instagram. Whenever someone signs up for Tangle, they’re prompted to fill out a survey in my “welcome” email. This reader said they were “younger than 18,” their politics were “far-left,” and they were writing from Nairobi, Kenya. I’ll never forget that. That was the moment I really felt the power of the internet, of this platform, of our potential reach (if that was you, and you’re reading this, please reach out: I want to send you something).

In the two years since that first “Shuffle,” I’ve learned a lot about the country and about myself. I’m not going to sugarcoat it for you: we are a divided nation, sometimes hopelessly so. We are consuming different news and experiencing drastically different day-to-day lives, and there is a lot of work to be done to expose people to the experiences of others they don’t yet understand. Most days, the things I write in the newsletter draw furious responses from two people making totally opposing arguments.

But I also feel hopeful. I’ve learned that, above nearly anything else, most people just want to be heard and acknowledged. And that is not some tired cliché, it’s just a fact. I can’t tell you the number of times I’ve gotten an angry email or Twitter message and simply responded, acknowledged what the person said and validated their perspective, only to have them write back and thank me and then attempt to better understand my position. It’s not always easy. Sometimes, people write in and say things that piss me off, but I’ve never regretted taking a breath and trying to channel their own perspective and chew on it before responding.

I’ve also learned that I’m not a moderate. I’m not a centrist. I’m not a lefty or a “Bush-era” Republican (no matter what some of you say). Like a huge swathe of the country, maybe more than a third of it, my political views are incongruent and my political loyalties no longer exist as they once did. I care deeply about certain issues and have very strong, sometimes extremely partisan views on them. I’m quite cynical and loathe a lot of things about the mainstream views in both political parties. I’m also open, more so than I’ve ever been, and have learned to embrace changes in my own opinion and perspective.

You might understand if I felt personally attacked, being that I write a daily section called “my take.” But, in a lot of ways, Jane is right. There are times when I’m writing Tangle and feel like a fish out of water, which is okay. I know a lot about Congress, elections, the news media, immigration and police reform. I know a lot about New York and suburban Pennsylvania and rural Texas and Israel and other places I’ve lived. I know a lot about how partisanship works and I know I’m a good researcher, a good interviewer, and good at holding skepticism about certain issues.

But I have blindspots: I know less about tax policy or how to solve rising health care costs or housing issues. I don’t know what it’s like to live in a housing project or on a farm. I don’t know what it’s like to be rich or a cop or an undocumented immigrant or on the wrong end of racism. My job, as I see it, is not to have the right take on everything, but to add my own honest perspective and whatever helpful context I can on wherever the news takes me. I’ve gotten better at saying “I don’t know,” and I’ve found that my readers actually appreciate it when I admit that.

When I started this, I had one goal: I wanted to expose people on the left to conservative views and people on the right to liberal views. Not what they saw through Fox News or MSNBC, but actual arguments that might actually compel them to change their position or — at least — help them understand the perspective of the other side with some more empathy.

I do not write Tangle to change people’s minds on anything. That’s why, unlike most news outlets, I don’t endorse candidates and rarely take firm, black and white positions on an issue (though of course it happens every now and then).

I write in hopes of expanding people’s worldviews. Study after study has shown that we are all living in information silos; bubbles of political news surround us that only reinforce our prior views and often make “the other side” look less rational every day. Very few Americans (and now, global citizens) completely trust the news they consume. My hope was to change that: to build a news organization people could trust irrespective of their politics, to expose people to views outside their bubble, to be radically transparent and honest about the person behind what you’re reading. My personal hope, on top of that, is that Tangle may help facilitate conversations among family members, friends and neighbors who disagree politically.

Tangle now has over 25,000 daily readers. Some single editions have surpassed 100,000 views. We have more than 4,000 paying subscribers, a podcast, a merchandise store (that now has stickers and mugs), and thriving channels on Instagram and Twitter. Every day I hear from people who say they use the newsletter as a jumping-off point for understanding major issues, or as a starting place to dive in with their family members and friends about politics. And we’re still growing.

Along the way, we have assembled great partners: Ground News, World Politics Review (when you subscribe to Tangle, you get six months of WPR for free!) and Braver Angels, among others. My social media manager and right-hand Magdalena Bokowa is now firmly embedded in the team, working 20 hours a week and (finally) being paid something close to what she’s worth (I actually created a journalism job!) We even have an intern — a college student from North Carolina named Sydney — who has been helping run our social channels and edit the newsletter. I’ve managed to keep my dad and two friends on as copy editors and argument-busters each morning. Today, I’m writing this edition from a shared office space with some friends that I finally got off the ground, which is occasionally referred to as “Tangle headquarters” (mostly by me).

But there’s a lot more we want to do, too.

As you read this, a new microphone and some acoustic foam are in the mail on their way to me. I’ll be building out a recording space in the new office, and am currently talking with our weekly podcast editor about coming on into a daily position to edit readings of the podcast. While the newsletter is always going to be ad-free, I’m also discussing some podcast sponsorships with a few companies who I’ve shouted out or partnered with in Tangle already. With any luck, by early September, you’ll be able to read or listen to every Tangle newsletter.

We’re continuously trying to tweak the newsletter to improve, too. One idea in the pipeline right now is about reforming the “Quick hits” section. Instead of linking to the primary news sources, I’m planning to link to Ground News’s pages that summarize each story and allow you to see the difference in how various news sources are covering it — something that feels much more in the Tangle ethos.

I’m also kicking around the idea of reader-submitted content. As I often say, one of the great joys of Tangle is hearing from all of you — people who are experts in their fields, or at least experts on their own communities and lives. Each day, this incredible kaleidoscope of responses, arguments and perspectives lands in my inbox from across the country. I’d love to start taking reader submissions for essays that are published in Tangle and give you all the same pleasure I have of reading those perspectives from across the world.

There are other projects I’m working on, as well: the weekly UFO newsletter I want to launch, publishing a collection of essays I wrote when I was living in Israel, working on a book about my long lost uncle, figuring out how to successfully grow vegetables in my backyard, and so on.

But for now, today, I’m just trying to pause and enjoy the fact that two years ago I sent a very bad newsletter with a goofy name to 10 friends and my parents. And instead of laughing at me, they submitted questions, told me what they liked, and urged me to keep at it. Two years later, I’m working for myself at my dream job. It’s stressful and incredible and challenging and exhausting, but also fun, and I’m learning so much. But more than anything, it’s fulfilling, and for that I’m most grateful of all. Especially to you.

To celebrate this milestone, on Sunday, at 8pm EST, I’ll be hosting an Instagram live chat with readers to answer some questions and just generally say hi. If you have something you want to be discussed on the chat, just reply, write in and let me know. You can find our Instagram here, and you can tune in simply by going to that page at 8pm EST on Sunday.

Thank you. For supporting Tangle, for subscribing, for telling your friends, and for spreading the word.

P.S. As always, feel free to email Tangle to friends by clicking here.