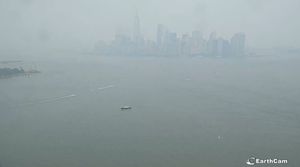 Since President Biden was inaugurated, newsrooms across the media industry have been struggling.

It doesn’t matter whether it’s The New York Times, Fox News, a top podcast or somewhere in between — but traffic, ratings, time on websites and all the rest have gone down dramatically for partisan outlets, mainstream outlets and even some independent writers.

I first wrote about this in March. There are many theories about why this is. Some think it’s as simple as a post-election lull. There was so much anticipation about who would be the next president that, now that it’s settled, fewer people are paying attention. Others think it’s a product of the Biden administration: more traditional, more boring, less drama and novelty. Perhaps it’s that Trump — a television and ratings man most of his life — was simply that much more focused on working the media, getting attention, making a splash. Maybe it’s that the changes in commuting patterns and daily routines leave less time for news consumption. Maybe it’s just burnout. For readers and for writers.

My personal view is that it’s some combination of all these things, with another important addition: the “return” to normal life. In many places, for a lot of people, the post-coronavirus world simply means going outside, seeing family, seeing friends and doing things that don’t involve sitting down in front of a computer or a television screen to consume the news. On top of that, Covid-19 itself, despite the rise of the Delta variant, is a less dominant story — and few things drove more traffic or interest than Covid-19.

In the newsletter industry, one of the most important metrics for health is called “open rates.” Open rates are just what they sound like: the percentage of people on a mailing list who open any given email. There’s a general rule about them, which is that anything above a 40% open rate is considered excellent. During the lead-up to the election, in November, Tangle was regularly hitting 55% to 60% open rates — something that was basically unheard of for a newsletter of our size. It was one of my prouder metrics, one that would make other people in the industry say “wow” when I told them.

Now, we are consistently around 40-45%, with some “clickier” newsletters (like “Dr. Fauci’s emails” or “Is Joe Biden okay?”) still doing well above a 50% open rate.

This is great news. And, while it’s certainly a little slower than what it was back in November, when we were on the cusp of a new president, or in January, when a large portion of the country was unsure if Joe Biden would even be inaugurated, the drop off is understandable and expected in the political world. My expectation is that as people settle back into new routines, and with novel news stories or election cycles (like the 2022 midterms), the traffic and open rates will creep back up.

But it has also made me very curious. Curious about you — this amorphous group of 25,000+ readers in every state and over 40 countries outside the U.S. who are out there reading. We’ve got readers from the northernmost point in America (at the tip of Alaska) and others on the southern border of Texas, a stone’s throw from Mexico. Are both of their reading and news consumption habits really similar? What about with our readers in Algeria? And if so, how? And why?

The changes in the industry are also coming on the eve of Tangle’s two-year anniversary, which is next week. You’ll be hearing more about that, and all the things I’ve learned in the two years since I sent my very first newsletter, but for now I’m just curious to hear more about you.

So I’ve put together a little survey.

It’s short — it should take you just a few minutes — but it’s important. It’s a great way for us to understand our readers, and it’s also an opportunity for you to help drive the future of Tangle. As I’ve said since I first started this newsletter, one of the ways I want to make Tangle unique is by involving readers directly in the content itself. That means replying to reader questions, sharing reader criticisms, and allowing readers to help decide what we actually cover. In the future, it might mean sharing reader perspectives in an even more direct way — like publishing letters to Tangle or other reader content.

For now, though, I just want to take a chance to get to know you a little better. So I’m asking you to take this poll, which will also offer you an opportunity to leave some personalized feedback. The poll is completely anonymous (unless you leave your email address) and you can skip any questions you’d prefer not to answer.

A few days ago, I woke up to a peculiar message on my phone:

“What the hell is going on outside?”

I wasn’t really sure what it meant, but on my walk to work, it became clear. The streets in Brooklyn were just — oddly — hazy. It looked like a house fire was burning nearby, and as the sun came up, it lit up the sky in an eerie burnt orange, where you could almost see the perfect circle (and stare at it) as it rose. I glanced at my Citizen app (which reports emergency events in New York City) to see if there was a fire nearby. Nothing. And then, as I often do when I can’t figure out what’s happening around me, I turned to the internet.

A few quick searches of “smoke in Brooklyn” on Twitter turned up photos of the New York City skyline stuck in a thick haze. And then came the answer, and it threw me for a loop: it was from the wildfires out West.

For the next two days, this smoke just sat on the city. My wife had been holed up inside studying and working all day, so when I got back from work I asked her if she had been outside. She hadn’t, and so we went onto our front porch and just stared at the street for a few minutes together. It was unsettling, mesmerizing and bizarre, all at once. It also kept me from working out at the local park and instead left me in the gym for a couple of days.

I know, out West, living with wildfire smoke is now a part of life. A few reporters I follow from California expressed amusement at seeing “New York people” experiencing wildfire smoke, and also offered advice about how to avoid it.

But I think the implications of this smoke are understated. For a lot of people — approximately 75% of the country — watching wildfires from afar, or seeing burnt orange skies on the news and scary headlines on TV, is an abstraction. But when the smoke comes to you from 3,000 miles away, it becomes real. That was the feeling I had: it was something that wasn’t my problem, until it was.

And it’s not just smoke in Brooklyn. Over the last couple of years, I’ve had a few similar interactions with the environment. Just last week, on my honeymoon, we were in Tulum, Mexico. When we arrived there, the coastlines were not the crystal clear blue you see in the tourist packets — but brown. That’s because of sargassum, a red algae that often hits the shores of Tulum in the off-season.

But this year, and in the last few years, the sargassum red tide has been particularly bad. Researchers say it’s because of the warming ocean waters. The issue, for business owners and anyone in the tourism industry, is much more practical: sargassum makes the beaches ugly and the water much less appealing, which keeps visitors away and kills their bottom line. For environmentalists, it’s equally scary, because when it decomposes it releases a toxic organic substance that harms coral reefs and marine fauna. Meanwhile, the sargassum itself feeds on chemicals dumped into the sea, which provide it nutrients and help it grow even more.

Two summers ago, before the pandemic, I went to Cape Cod. When we got there, the beaches were oddly empty and many of the local haunts that are usually overflowing with tourists were seemingly dried up. The reason was that sharks had come north into the Bay and the ocean, including one that attacked and killed a surfer.

At first, I thought the arrival of the sharks — which were a rarity on Cape Cod when I was a kid — was tied to climate change. It turns out I was wrong: it was actually a positive development, in some respects, because it reflected a successful restoration program to bring seals back to the Cape, and the sharks were arriving for the first time in 200 years simply because they were hunting the seals.

But when I spoke to a local hotelier about the issue, he predicted this would become an issue for other coastal cities as far north as Maine. Sure enough, last year, a woman was killed off the Maine coast in a shark attack that has left the state on high alert for sharks in the water. Some experts have argued that the sharks there are similarly a response to a growing seal population; others think warming waters are driving more sharks north regardless. I’m not sure it’s going to matter either way: life is changing for a lot of beachgoers in New England.

The smoke this week in Brooklyn, my experience in Tulum, and my digging into the sharks on the Cape, have collectively left me with a creeping sense that these environmental issues — whether directly related to climate change or not — are slow-rolling into people’s lives more and more every year. I’m not sure, truly, what the political implications of this are going to be, but I do think there will be some.

Americans in the southwest have been battling droughts and water shortages for years, but will the combination of those issues getting more severe — plus unprecedented wildfires — have serious political consequences that haven’t already come? What about midwestern droughts and floods? What about eroding coastlines in Florida? What about absurd flooding in New York City? What happens when this stuff becomes more than a regular nuisance for Americans who otherwise may not care very much about environmental issues?

I really don’t know, but it just struck me that these things have touched my life so obviously — and are probably touching the lives of others, too. It’s something I think is important to keep a close eye on in the months and years ahead.

And when you’re done doing that, consider becoming a subscriber. Or, if you are a subscriber, go check out our merch store.

Have a great weekend!