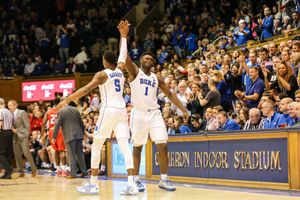 When President Trump released a transcript of his phone call with the Ukrainian president, both Republicans and Democrats were shocked that the White House made it public. Some immediately saw the transcript as damning, noting that it essentially supported the claims made in an explosive whistleblower complaint alleging that the president was pressuring Ukraine into investigating Joe Biden (and holding military aid over their head while he did it). At the time, I wrote in Tangle — and other reporters noted as well — the incongruency between the transcript and the call time. It was a 30 minute call but the transcript was just a few pages, not nearly enough to encapsulate a call of that length. Yesterday, Alexander Vindman testified that the ellipses in that transcript included explosive assertions from President Trump about Biden, his son, the company Biden’s son worked for, and insistence that Ukraine’s President Volodymyr Zelensky investigate him. Click.

Video of the day.

The NCAA. Yesterday, after mounting pressure from states like California, the NCAA voted to allow college athletes to profit from their name, image and likeness. This comes just weeks after California passed a law to allow college athletes to get paid for endorsement deals and hire sports agents. The NCAA’s governing board voted unanimously to approve the change, issuing a statement that it was “embracing” change. Still, the NCAA’s three divisions are going to have to craft their own rules on what the future looks like. Previously, NCAA athletes were prohibited from being paid in any way. The NCAA says that it was in order to maintain its status as an amateur sports organization, but there’s lots of evidence it’s because the NCAA knew it would lose money to the athletes.

Finally. The NCAA’s rules forbidding college athletes from making money has been a target of Democrats for years, and last month’s California law was widely cheered. California’s Democratic Gov. Gavin Newsom got exactly what he wanted, too. By passing the law in California, the state essentially forced the NCAA’s hand. If California allowed college athletes to make money, it would have a clear recruiting advantage over other states that didn’t. So the NCAA was essentially forced to make a change, though the organization still claims the law is unconstitutional and says it is going to fight it going forward. In making the case college athletes deserve to get paid, Democrats have often noted how much money big-name athletes bring in for universities. What’s most striking, though, is that some of those famous athletes come from underprivileged backgrounds. Dozens of stories have surfaced about star athletes making universities millions of dollars while simultaneously struggling to eat or afford gas money. And yet they couldn’t even sign a shoe deal or sell jerseys with their names on them. There’s a good chance that’s about to change now.

It depends which Republicans. Richard Burr, the Senator from Virginia, made the biggest splash in the wake of the news with this tweet:

Almost immediately, Burr was chastised by the left and right. Political commentators noted that Burr voted against the STOCK Act in 2012, which prohibited members of Congress from profiting off insider trading. Some pointed to the incredible “ratio” on Burr’s tweet (that’s when there are far more responses to a tweet than retweets, which usually indicates someone said something everyone hates).

For the most part, Republicans also cheered the NCAA’s decision. Their support comes from a slightly different place, though. Conservatives have shown support for treating student-athletes more like other students, and have described the NCAA’s announcement as “free-market reform.” Lots of conservatives have always thought it was absurd that the NCAA forced students to sign away their rights to their own name and likeness just to get in uniform and play sports. David French, one of the most prominent  conservative voices online, criticized Burr’s proposal and said “‘Cashing in’ is another way of saying ‘making a living.’”

I’m a huge sports fan. As some of you know, I actually got my start in journalism as the sports editor for The Pitt News. That was 10 years ago, and it was tough to imagine back then that this ruling would come down so soon. The grip the NCAA had on this, and the money they had for lobbying politicians and pushing schools in one direction, was remarkable.

To that point, there are some caveats worth noting. For one, the NCAA was essentially forced into this decision. There is no way those board members make this call on their own, and certainly no way they have this vote without Gov. Newsom’s new law last month. The moment California passed that law, other states immediately expressed their desire to do the same, and the NCAA couldn’t sit back and let an uneven playing field develop across the country. Two, despite all the headlines, the NCAA didn’t just green light college athletes to “cash in.” It instructed each division to create frameworks for how college athletes might be able to profit off of their own name, image and likeness. That’s a much different mandate, and the devil will be in the details. It’s not even clear if the athletes will get paid, the NCAA only allows that they will be able to “benefit” from the new rules.

In short, this story requires a lot more time before a victory lap. For now, though, it’s clear the once impenetrable wall is coming down and a future where college athletes can profit from their gifts seems much closer than it ever has.

President Barack Obama was trending online yesterday after he offered a sharp critique of “cancel culture” and the “activism” he sees in politics today.

Reminder: Tangle is about answering reader questions from across the country. I want to know what you’re interested in, and I want to answer questions you have about politics so you can spend less time sifting through partisan, hot take news. If you have a question you want to be answered, just reply to this email and write in.

Tangle: The first thing I want to say is that what happened to Rep. Katie Hill is disgusting. For those not familiar with the story, nude photos of Rep. Hill were published on the conservative website RedState earlier this month and then published again in the British tabloid The Daily Mail. Hill says the photos originated with her abusive husband, who she was in a polyamorous relationship with, and who she is currently going through a divorce with. The pictures have been widely — and accurately — described as revenge porn. Her husband allegedly shared the photos with GOP operatives to smear her, since one of them included pictures of her kissing her female campaign aide. Accompanying the photos were allegations that Hill had two affairs with campaign staffers — one with an aide and one with her current legislative director. Hill has admitted the relationship with the aide but denied the one with her legislative director.

Now, I want to pause to acknowledge something here. Hill did break House rules. And those House rules were put into place in the wake of the #MeToo era, designed specifically to stop exactly what Hill did: get into a relationship with someone who she wielded significant power over. Representatives are now prohibited from engaging in romantic relationships with employees and Hill clearly violated those rules, and as a consequence, she became the first member of Congress to lose her seat under the new rules. There’s also evidence that Hill used that power to intimidate the young staffer, including text messages that depict a toxic relationship between the two.

All that being said — and I do believe Hill’s resignation was necessary — this is still an ugly win for revenge porn. This story only received the press it got because the explicit photos of Hill were published without her consent. It was obviously planted by someone who held a grudge against her, and it’s tough to imagine that someone being anyone besides the soon-to-be ex-husband. That RedState and The Daily Mail decided to publish the photos when they could have sourced the allegations separately or simply note that they obtained photo evidence of at least one affair is a travesty. While the nude photos helped the story gain traction, something RedState surely knew, they weren’t necessary to hold her accountable. And no publications should be posting nude photos of anyone without their consent, male or female.

Even this goes without noting the absurd hypocrisy of the situation. There have been male members of Congress, like Rep. Joe Barton, who retired after graphic photos of them were released. But it’s pretty darn rare. More prominent politicians like Duncan Hunter have had several affairs, including one with his own staffer, and he’s remained in office. Jill Filipovic took to Twitter and counted eight male legislators credibly accused of sexual misconduct, affairs with subordinates, or sexual harassment that haven’t resigned:

As for defenses of Hill, there were actually a lot of people who backed her — from Democratic strategists to Mayor Pete’s director of communications. Here are some tweets below:

Students across the U.S. are doing worse in school than they were just a decade ago, according to a new nationwide test. Eighth graders are falling behind in math and reading, while fourth-graders are doing slightly better in reading, says the Nation’s Report Card. A little more than a third of eighth-graders are proficient in reading and math, a concerning note given how important the transition into high school often is for students. Theories about why this is happening vary, from ties to the economy and impacts of the great recession to the need for improving school choice or funding for public schools. Regardless, it’s a concerning trend in a country that is already trending towards the middle in education amongst developed nations. You can read more here.

Two California billionaires donated $750 million for climate change research, a windfall investment in Caltech and the second-largest donation ever to an educational institution. It’s also the largest donation ever given to help combat climate change. While public policy and government reform are crucial to lowering emissions or making the world more eco-friendly, the private sector truly has the greatest power: research and innovation could unlock new ways to reduce climate change and make the planet a greener place. Cheers to Lynda and Stewart Resnick, who are now trying to make that a reality. You can read more here.

Tangle needs your help. I do my best to avoid ads, marketing, promotions, clickbait headlines or partisan hot takes. That means it can be difficult to go viral or pay for growth. Which means Tangle only spreads via word of mouth. If you want to support the newsletter, there are a few easy ways to do it: