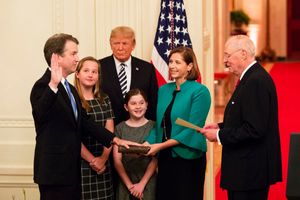 This is an excerpt from Tangle, an independent, ad-free, non-partisan politics newsletter that covers the day’s biggest stories in less than 10 minutes. You can subscribe below.

Brett Kavanaugh. On Saturday, The New York Times published an essay from an upcoming book on its opinion page. In it, the two Times reporters who authored the book tell the story of Deborah Ramirez, the second woman to claim she was sexually assaulted by Brett Kavanaugh. Reminder: Kavanaugh is the conservative justice who was nominated and confirmed to the Supreme Court in the summer and fall of 2018. Ramirez previously alleged that at a dormitory party during her freshman year at Yale, in 1983, Kavanaugh “pulled down his pants and thrust his penis at her, prompting her to swat it away and inadvertently touch it.” Kavanaugh’s confirmation hearing was derailed by Ramirez’s allegations along with those of Christine Blasey Ford, who alleged that he held her down on a bed during a party when they were teenagers, covered her mouth and tried to force himself onto her before she escaped. This new book takes a deep dive into both allegations, but also references a previously unreported third story about Kavanaugh from a different party in which a classmate claims to have seen Kavanaugh and his friends pushing his penis into the hand of a different female student. The classmate, Max Stier, said he told the FBI about this story but they never investigated it.

The details put forth in this new book, which was reported out for 10 months, are grounds for impeaching Kavanaugh from the Supreme Court. During his confirmation hearing, Kavanaugh defended himself by saying if Ramirez’s story were true, it would have been the talk of campus. Now this reporting suggests it was, in fact, the talk of campus. The Times reporters say several friends remembered the story of Ramirez and had spoken about it in the days after it happened. The reporters also said they found Ford’s testimony “credible” during their 10-month investigation, which Democrats are quick to note was far more time than the FBI or Republicans spent on the allegations. Elizabeth Warren, Kamala Harris, Julian Castro and Bernie Sanders all reacted to the excerpt’s publication by calling on Kavanaugh to be impeached. Other liberal activists are noting that the FBI was not given enough time to conduct their investigation, and had they been they would have found what these reporters found: that the allegations were credible and there were more than just two.

You wanna do this again? For most conservatives, nothing during Trump’s presidency has united the right like the allegations against Kavanaugh, which were widely derided as flimsy and slanderous. This new writing just adds to the pile of shoddy reporting and half-baked allegations from four decades ago. First off, the “new” allegations aren’t even recalled by the woman who allegedly experienced them. Max Stier is the only witness testifying to those events. The New York Times had to include the following editors note after publication to clarify that the woman Stier says was forced to hold Kavanaugh’s penis declined to be interviewed for the book and her friends said she didn’t recall the incident.

Also, buried at the end of the new book is a new piece of information getting far less coverage: that Ford’s lifelong friend Leland Keyser didn’t believe Ford’s account of what happened. Keyser was named by Ford as a witness to the events, but this excerpt caught a lot of conservatives’ attention:

We spoke multiple times to Keyser, who also said that she didn’t recall that get-together or any others like it. In fact, she challenged Ford’s accuracy. “I don’t have any confidence in the story.”

Keyser also told the reporters that she was threatened by mutual friends to “comply” and support Ford’s claims more publicly, and if she didn’t, rumors would be spread about her. The reporters confirmed these claims to be true.

What is most compelling to me about the Kavanaugh saga is that you can predict whether someone finds the allegations against him credible based almost entirely on their politics. It’s a scary sign of the times that political ideology is the strongest predictor of how two people view an identical set of facts (or, in this case, whether people are even working with the same set of facts). Writing about these allegations against Kavanaugh is a wrought affair. Two New York Times reporters spent 10 months fleshing these stories out, and while they land on words like “credible” to describe Ford’s allegations they also write about their own “gut instincts” and concede hard evidence was hard to come by. I remember watching Ford’s testimony and being so struck by her pain in detailing what happened to her that I was certain she was telling the truth and Kavanaugh’s nomination was sunk. Then, minutes later, I found Kavanaugh nearly as compelling in his defense and the nature with which he defended his own character struck me as convincing, even if it seemed — at times — a bit unhinged for a judge on the highest court in America. I can’t presume to know what happened on any of the three nights these assault allegations took place, though I’m inclined to pause anytime someone has been accused of three separate incidents of harassment or assault. What I do know is the political fight that will come from this is a dangerous game for both sides. So many conservatives view what happened to Kavanaugh as a smear that even the ones who tepidly support (or totally dislike) the president could coalesce behind him if Democrats try to remove Kavanaugh from the court. On the other hand, so many women (particularly educated, suburban, registered-voting women) are so tired of having their voices silenced when they come forward with allegations of harassment or assault. Mocking these allegations as absurd could just as easily alienate and motivate those voters.

The New York Times opinion section took a lot of heat for the tweet below, which it eventually deleted and apologized for.

Want more of this?

Tangle comes out Monday through Thursday, around lunchtime (EST). It always offers a healthy spectrum of view points and works to synthesize the news into something simple. You can subscribe below.