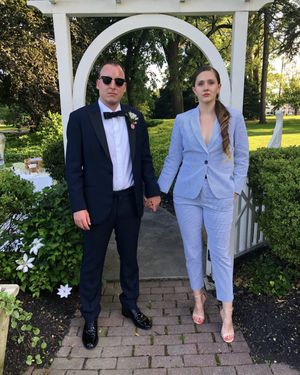 To my lovely readers,

Excuse the mushiness, but I guess I’m feeling the moment. 18 months ago I got engaged to the woman I love. On Saturday, I get to marry her.

I popped the question the day after Halloween in 2019. Life was, at the time, pretty normal. It has been a wild 18 months since (see: presidential election, coronavirus, leaving my job, not leaving the house, growing Tangle, etc.) but I’m grateful for the work of so many to bring us the gift of these miraculous vaccines and for the good health of so many of my family and friends. I feel incredibly fortunate we are finally on the other side of this pandemic, in a world where it’s safe (and legal) to gather with our loved ones.

Given that so much of life has been on hold for so long, and that I have seldom taken a day off in the last 18 months, I’m embracing “real life” for a few days and putting work aside. We’ve got family and friends coming in from all across the country to celebrate, and lots of people to catch up with face-to-face. Therefore…

Tangle will be off tomorrow, Friday and Monday. I’ll be back in your inbox on Tuesday. And if I’m a little slow replying to reader emails, this is why!

In mid-July, Phoebe and I will be traveling for our honeymoon, and I’ll be taking a few days off then, too. Otherwise, you can expect Tangle in your inbox on its regular Monday-Thursday schedule (for those of you on the free list) and on Fridays too if you’re a subscriber.

Speaking of subscribing: A few very kind readers who picked up on the wedding have asked about a gift or a donation of some kind. If you’d like to give a wedding gift, you can — uh —subscribe to Tangle by clicking here. Every subscription helps, and hopefully one day I’ll be able to take some time off and tag a co-worker in without missing a beat (for now, I’m not quite ready to hand over the reins).

If you’re already a subscriber, please consider gifting a subscription (button below) to a friend or donating to Heavenly HRVST, one of my favorite charities fighting food insecurity. Any and all of the above would make me extremely happy.

Give a gift subscription

Anyway, here’s the soon-to-be-married couple at one of my best friend’s weddings, trying hard not to smile. Notice the disparity in attractiveness, and please wish me luck in not blowing this (also, pray for no rain on Saturday in the state of New York!)

Thank you, as always, for the support and love, and for making this project possible. And if you’re new here, welcome — and apologies! You have very good/bad timing. I appreciate your anticipated understanding of this unique moment in our lives. We’ll see you again on Tuesday.

A few readers replied to yesterday’s edition objecting to the use of “uneducated” to describe voters without a college degree. Let me just say: I’m with you. Some of the smartest, most successful people I’ve ever met don’t have a college degree (and lots of the most ignorant people do). And “uneducated” does not fully credit the millions of Americans who have training in specific trades. Sometimes I fall into the trappings of the common political parlance, and I’ll ruminate a bit on how to better address it.

There have been a few pretty good pieces of journalism and opinion writing in the last few days. If you’re looking to dive in on something without Tangle in your inbox, here are my suggestions:

The charity RIP Medical Debt announced on Tuesday that it is planning to buy $278 million of medical debt from hospitals in Tennessee and Virginia. RIP Medical Debt has been working to buy up the debt of medical patients across the U.S., but this marks the first time the organization has ever struck a deal with a hospital — in this case, Ballad Health. In sum, the charity will be relieving the debt of approximately 82,000 people and as many as one in five people in some zip codes. (Business Insider)

Want to show some love?