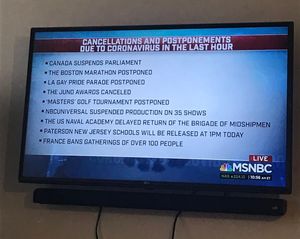 Tangle is an independent, ad-free, non-partisan politics newsletter that offers both sides of the biggest news stories every day. If you found this online or someone forwarded you this email, please consider supporting balanced, independent journalism by subscribing below:

Tangle is a Monday-Thursday newsletter, but today is a special Friday edition. It will be an update on America’s response to coronavirus and what you need to know.

Yesterday, America shut it down. Major sporting and artistic events across the nation were all suspended or canceled. The MLB, NHL, MLS, and NCAA all joined the NBA in suspending or canceling their games. Broadway theater in New York City, famous for its tagline “the show must go on,” the single biggest tourist attraction in America’s biggest city, closed down. Last year, Broadway generated $1.8 billion and drew 14.8 million patrons. New York declared a state of emergency, banning public gatherings of more than 500 people in New York City (which means historic venues like Madison Square Garden are effectively closed). Maryland, Oregon, Michigan, New Mexico, Washington D.C. and Ohio are shutting down their schools. As is Washington state in counties impacted by the virus. Churches across the country shut down. Concerts have been canceled.  All of this is an effort to “flatten the curve,” an expression you might hear a lot of. Essentially, unchecked, the virus will spike in infections and deadliness before coming back down. But with measures like massive social distancing and testing, we can “flatten the curve” and avoid the huge run of infections.

Washington D.C. is still bickering along partisan lines. A day after calling for unity in his national address, President Trump is slamming Joe Biden, Nancy Pelosi and Barack Obama. He’s pointing fingers at everyone and blaming past administrations — and the CDC — for not being fully prepared. All while promising that things are going well. Republicans and Democrats are fighting over the details of a response bill, one that Trump may not even sign. The market has completely tanked, and it could erase all gains since Trump’s inauguration in 2017 by the end of the day. An unthinkable amount of wealth and retirement savings have been lost to the wind over the last few days, and it might get worse. While the mass shutdowns are the right move, a lot of workers across hundreds of industries are going to lose their jobs or their paychecks by staying home. This will hurt low-wage workers the most. Dr. Tony Fauci, the renowned disease doctor perhaps most trusted by everyone in D.C., admitted yesterday that the coronavirus testing system is “failing.” That’s perhaps the single most important thing needed to flatten the coronavirus curve. In the meantime, people are “panic buying” at stores, supply chains for things like medicine are being threatened, and doctors are still trying to better understand the virus.

The drastic moves being made all across the U.S. are the right moves, and there is a good chance they help slow the virus’s spread. In Mainland China, where the virus spread faster than anywhere else, 64,000 of the 80,000 people infected have fully recovered. Only 20 additional cases were reported yesterday and “signs of improvement” are everywhere. South Korea, which had the most infections outside of China, said 177 patients were discharged from the hospital yesterday, more than the 110 new cases they got (that means the number of people with the virus is now dropping). Apple Inc. re-opened four of its 42 stores in mainland  China which had been shut down due to the virus. China’s success containing the virus “has surprised experts,” The Wall Street Journal reported. As the outbreak continues in those initial countries, the places that have been spared have an opportunity to learn from the way they handled it. There are also some quick advancements being made in testing and for a vaccine. The Pentagon says they have a working vaccine on the way and the FDA just approved a coronavirus test that gives results in four hours.

A number of well-known people have now been seriously impacted by coronavirus. Justin Trudeau, Canada’s Prime Minister, is in isolation after his wife tested positive for coronavirus. There are conflicting reports Brazil’s president Jair Bolsaonro tested positive or negative for coronavirus this morning (he visited with President Trump on March 7th). Fabio Wajngarten, a top communications aide to Brazil’s President Bolsonaro, did test positive just days after meeting with Donald Trump and Mike Pence. Steve Peoples, an Associated Press reporter, said he is showing symptoms but was unable to get a test. Australia’s home affairs minister Peter Dutton tested positive for the virus, as did the manager of the famous Arsenal soccer club. Actor Tom Hanks and NBA stars Rudy Gobert and Donovan Mitchell all tested positive.

Wash your hands. Stay home. Avoid crowded areas. Wash your hands. Catch up on some TV. Wash your hands. Give it a couple of weeks. Wash your hands again. If you’re a worker who can’t simply work remote, now is a good time to broach the conversation with your boss about what the plan of action is. And if you have to go into work, keep washing your hands, wipe down the hard surfaces around you and limit your physical interactions with other people best you can.

If you’ve enjoyed Tangle, and you sense the importance of this time in history we’re all witnessing together, please continue to share the newsletter. I believe this new framework for covering politics is more important than ever, and I am so grateful for everyone being a part of it.