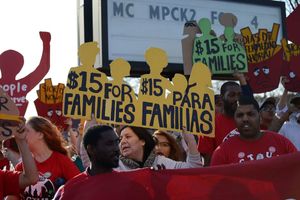 Tangle is an independent, ad-free, non-partisan politics newsletter where I answer reader questions from across the country. If you found Tangle online, you can subscribe below.

Trump and war criminals, minimum wage updates and a question about impeachment.

Over the weekend, Mayor Michael Bloomberg made his candidacy for president official. The billionaire mayor is already the biggest spender in the race with a major ad buy this week. His news organization, Bloomberg News, says it won’t do investigative work on Bloomberg or any other Democratic candidate because it can’t be taken seriously as an impartial source. While Bloomberg is polling towards the bottom of the pack, his allies think his numbers will rise as news of his candidacy spreads. Skeptics say the more the left-wing base finds out about the billionaire mayor, the less they will like him.

Navy Secretary Richard Spencer has been fired. Spencer’s forced resignation comes after he had an extraordinary public spat with the president over Chief Petty Officer Edward Gallagher, who was accused of war crimes. Gallagher is a Navy SEAL who was charged with murder after his platoon members reported gross misconduct (think: shooting innocent people, posing with their corpses, stabbing a prisoner of war while he was being treated by a medic). Gallagher was acquitted on all charges except the least serious — posing with the corpse. Afterward, the Navy decided it would strip him of his Trident, an elite military rank for SEALs. Fox News took Gallagher’s side and invited his lawyer and family members on television to defend him. An hour after the segment aired, Trump followed suit, and on Friday he announced via Twitter that he would be overruling the Navy’s decision to strip Gallagher of his rank. Spencer responded by threatening to resign. Trump responded to his response by having Mark Esper, the Defense Secretary, ask for Spencer’s resignation. Then Trump reinstated Gallagher’s rank.

It’s a gross abuse of executive power and proves Trump has no idea how to handle the military. Gallagher’s crimes were gruesome, heartless acts of violence that his own platoon members could not stand to tolerate — which is why they reported him. He committed war crimes and as a result, undercut America’s moral authority — which is already waning — on the battlefield. Trump, who has never served and in fact dodged service, overruled the perspective of a seasoned Navy veteran with combat experience who decided that what Gallagher had done made it impossible to keep his status in the Navy SEALs intact. Because Trump, and eventually Esper, turned on Spencer and had him fired, other members of the Navy have now been given the signal that they can act without a moral conscience on the battlefield and not face discipline.

Donald Trump is the Commander-in-Chief, and the people elected him to make decisions like this. It’s perfectly within his jurisdiction to overrule the Secretary of the Navy, even if it is unprecedented or unusual. But ultimately, Trump leads the armed forces, and his word is final — people acting otherwise are acting out of their own spite for Trump. While Fox News lobbied this pardon of sorts, plenty of other right-wing media personalities got behind it. Op-eds supporting Gallagher were plentiful. He was acquitted by a jury and the only crime he was found guilty of was posing for a photo with a dead combatant. Ultimately, people on the right came to the stance that Gallagher was the kind of tough, ruthless soldier they want in the battlefield, and the “politically correct left” was unable to see that Trump’s word on matters of the military is final. As for Spencer, he has also been accused of “lack of candor” behind closed doors, allegedly supporting Gallagher privately but thinking he had to remove his trident as a PR matter. The right has seized on those allegations and said his termination was warranted given he was not acting honestly with either the public or the president.

I happen to agree with most people on the right that Trump’s word here is not being respected the way it should be. He is the Commander-in-Chief, and he is perfectly within his right to make the decision he’s made. But it’s also true that he’s a Commander-in-Chief with no service record to speak of, and that the doctrine of our military should not be unwavering support for Trump. It should be unwavering support for our country and its purported principles. I also tend to agree that — if we are working from a baseline that we are already at war — I prefer the soldiers fighting on my country’s behalf to be tough, ruthless men and women. I’ve written here before about how I would support incremental reductions in military spending and how I believe our military wastes lots of money and is involved in far too many conflicts. But I believe most of those issues are bureaucratic and political in nature — they are not a product of the soldiers who are on the ground fighting wars or executing orders. They are a product of Congress and presidents sending them to wars we can’t “win.” I know a lot of people who have served in the military, and I’ve heard a lot of stories about war, though I’d never pretend to understand the experience of being on the battlefield. And still, I would not characterize our military as immoral, precisely because of how Gallagher was handled. He committed atrocities at war and as a result several of his fellow soldiers reported him. His superior officers punished him. And that’s how our military works. While it’s true he was acquitted, it’s also true there is a ton of evidence for the horrid things he did. It’s why so many members of the military have come out against Gallagher. They believe what he did was wrong, unwarranted, and beyond the pale. As a result, I agree with them. I don’t think anyone who conducted themselves the way Gallagher did should retire with a Trident, and I think Trump has undermined our credibility by restoring that Trident for Gallagher.

Reminder: if you want to send in a question, simply reply to this email and you can contact me directly. My goal is to make sure people can get the information they want, when they want it, without having to wade through the news.

Q: Is there a strategy on either side in the timing of a potential impeachment?  Meaning, is waiting an option, and does it help either side secure a more stable footing to make their case?

Tangle: The timing question has a few distinct angles. First and most importantly is how timing impacts public opinion. As I’ve written here before, the chance that enough Republican Senators vote to remove Trump from office (Democrats would need 20 “flips”) is basically zero right now. Nothing is a more important deciding factor in those votes than the political ramifications of what will happen next. While Senators enjoy more stability than members of the House (six-year terms versus two-year terms), it’s exceedingly unlikely that any turn on Trump when he has some 90 percent of Republican voters supporting him. However, Democrats have been looking for that “aha!” moment in impeachment hearings where something so damning comes up the public opinion suddenly turns against Trump. Given that no House Republicans look primed to turn on him, and given the polarization of our political news today, I sincerely doubt this moment comes. Most voters are insulated from competing views by the news they consume, which almost always reinforces their beliefs, and independents have mostly gone sour on impeachment.

Still, Democrats will want to time a vote on impeachment around a trove of evidence that rocks the political world enough they may be able to turn some Senators over. Rumors are out there that recordings and tapes exist of Rudy Giuliani, the president’s personal lawyer, discussing the pressure campaign on Ukraine. If that’s true, or if those tapes became public, it could do enough damage to turn some support around a vote. There’s also been a series of damning reports about Republican Rep. Devin Nunes, the face of Trump’s defense, and how he might have been involved in the very scheme he’s been tasked to investigate. Confirmation of that, too, could help Democrats’ attacks (Nunes claims he’s suing CNN and The Daily Beast, who reported on those connections).

The other big timing involves the election. If the House votes to impeach Trump, it could totally derail the 2020 Democratic primary. Two of the three frontrunners, Sen. Bernie Sanders and Sen. Elizabeth Warren, would have to be involved in impeachment hearings in the Senate. In the past, those hearing have run for up to eight hours a day some six days a week. If the House impeaches Trump in the next month, it could mean an impeachment trial in the Senate starts in mid-January and runs into early February, which is the first week of voting in Iowa. On top of Warren and Sanders, Kamala Harris, Cory Booker, Amy Klobuchar and Michael Bennet are all senators still in the race who would have to be at the hearings. This would put their ground game in Iowa and other early states in serious jeopardy, as they’d have to send surrogates to campaign on their behalf while other contenders — like Joe Biden or Pete Buttigieg — could be there in person.

On top of this, Democrats are also still awaiting some testimony. A court is going to rule today on whether White House counsel Donald McGahn has to testify. Other firsthand witnesses have resisted subpoenas, but instead of using courts to force their testimony Democrats look like they will simply add obstruction of justice to the articles of impeachment. House Majority Leader Nancy Pelosi has made it clear she wants to get impeachment voted on before the new year, probably sensing that Trump will survive this and voters’ interest will turn to the election. There hasn’t been any real leaks about the Republican plans timing-wise, but I suspect they’d want to get House Democrats voting as soon as possible — before any new evidence comes out and while the public fervor for impeachment seems to be taking a lull in the polls.

If you read this newsletter, you know that I have criticized Joe Biden’s performance on stage in the debates this year. As have thousands — if not millions — of others. A reporter from The Atlantic noticed that Biden’s sometimes unintelligible or sloppy lines on stage had all the hallmarks of a stutter because the reporter himself has lived with a severe stutter his whole life. It turns out Biden has a real stuttering problem. The reporter interviewed him about it and spoke about his own experience stuttering. It was an insightful piece and I never knew this about Biden. You can read it here.

MasterCard has banned automatic payments after free trials, in a huge win for idiots like me who try free trials and forget to cancel them all the time. The new rule requires a merchant to get a cardholder’s approval via text or email at the end of a trial before initiating payments. This news broke earlier this year, but I only came across it today (while deciding whether to cancel my new Disney+ free trial). You can read more about it here.