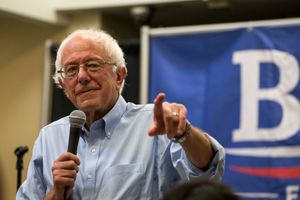 Bernie Sanders has a shot at the nomination, the breaking news on Trump and a question about international news.

Tangle hits your inbox Monday-Thursday, around lunchtime (EST). That means we’re off tomorrow. Please consider sharing Tangle with your friends, family, colleagues at work, or on social media. If someone sent you this newsletter or you found it online, you can subscribe below!

Over the last few days, whispers amongst the chattering class that Bernie Sanders has a plausible path to the Democratic nomination have become much, much more common. After Sanders had his heart attack earlier this year, he was written off as likely to drop out and endorse Warren or another progressive. But instead, he got back on the campaign trail and almost seemed sharper than he was before the heart attack. Even more surprising: his poll numbers have steadily improved. Recent Monmouth polls have him at 21%, just five percentage points behind Joe Biden. That distance could close when you consider the enthusiasm gap between the two, as Sanders supporters say they are far more excited than Biden’s supporters to vote (this often correlates with increased turnout). Young voters, too, who will make up the largest voting bloc in the country this year, prefer Sanders over every other Democrat combined (he has 52% of the under 35 vote, according to the latest Quinnipiac poll). He also came in second behind Elizabeth Warren in Tangle’s very super unofficial poll of readers, landing 24.2% of the vote.

The current odds market on who will become the Democratic primary winner and eventual president.

Dan Pfeiffer, a former Obama aide and now the co-host of Pod Save America, tweeted earlier this week that “Bernie Sanders' chances of winning the nomination are being underestimated and under-discussed. He might be the candidate with the best chance to sweep IA, NH, NV before we ever get to South Carolina.” In October, Sanders received the endorsements of Ilhan Omar, Alexandria-Ocasio Cortez and Rashida Tlaib, three of the most well-known minority women in Congress. Peter Daou, a former Clinton aide who once called Sanders’s movement a “hate movement against one woman,” is now forcefully backing Sanders in 2020 and apologizing it took him so long to come around. Matt Stoller, a far-left author and frequent critic of the Obama administration, noted that Sanders and Warren have the support of “seven out of ten Dems under the age of 35.” Keeanga-Yamahtta Taylor, an African-American academic, wrote a piece in The New York Times this week saying that the media was stuck in 2016 and still didn’t understand how Sanders was winning this moment. Yesterday, Sanders won the endorsement of the Center for Popular Democracy Action, one of the most important progressive groups in the country (it has 600,000 members). But there are still divisions on the left over Sanders. In a recent Politico article, Ryan Lizza wrote that a source close to Barack Obama said if Sanders appeared to be running away with the nomination, Obama may step in. Perhaps nothing illustrated that climate better than an interaction between Luke Savage, a writer at the socialist magazine Jacobin, and Mendoza Ferrer, a frequent critic of Sanders on the left.

In 2016, the right attacked Hillary as a corrupt establishment member and attacked Bernie as a radical socialist. This time around, though, it’s mostly slapped that “radical-left” tag on all the candidates across the board. The right-wing media machine has been all over the Joe Biden-Ukraine story and has landed a few shots on Bernie as well. One campaign staffer for Sanders was forced out after the conservative website Free Beacon found anti-Semitic and homophobic statements of his online. The top Sanders story on Fox News right now is one about him being heckled in Las Vegas by union members over his support for Medicare for All. While Warren may be the number one enemy of Wall Street, Sanders is the clearest representation of socialism. As I wrote in August, perhaps the biggest difference between Sanders and Warren is that Warren considers herself a capitalist (she wants a cop on the corner) while Sanders considers himself a Democratic socialist (he wants to tear the system down and rebuild it). That earns Sanders some respect amongst Trump-like conservatives but makes him even more worrisome to establishment Republicans.

I think Sanders can do it. And if my texts, Twitter feed and emails are any indication, a lot of people watching the election are starting to think he can, too. Part of the reason I decided to focus on this today is that the “chatter” about Bernie just seems to be reaching a new level, which is particularly notable given that he was written off just about six weeks ago (after the heart attack). To be clear, Biden is still the favorite. He’s ahead of Sanders pretty much everywhere that counts (including in Texas and [kind of] California). Biden remains stubbornly ahead of the pack in the polls, gaffes and predictions of his downfall be damned, and voters still seem to think he’s the most likely to beat Trump. And he’s still got the majority of black support amongst Democratic voters, which is key.

And yet! As Nate Silver said on Tuesday, “Bernie’s chances can be improving even if he isn’t moving up in the polls much. It’s more that there’s nothing standing in way of his winning given where the other candidates are now.”

And that’s the key here. Sanders’ path to the nomination isn’t the most likely, but it’s alive and healthy enough that a few breaks his way could turn the whole race on its head. First up will be Iowa, which — if Bernie won — could really throw gas on everything. Ahead of Iowa last year, Bernie was trailing Clinton by about three points in the polls and ended up essentially tying her. But around this time in the race — some eight weeks out — he was still trailing her in Iowa by a healthy margin. Yesterday, Emerson released a poll showing Biden and Sanders neck-and-neck in Iowa (23% and 22%, respectively). But Sanders rose 9 points from 13 percent in an October poll while Biden essentially remained the same. Those are two very different trends.

If he wins Iowa, the whole race opens up. He’s within striking distance in New Hampshire, only trailing Buttigieg by three points in the latest RealClearPolitics average. If he wins in Iowa and gets even half of the seven-point average bump that sometimes comes with that win, he could end up with a clean sweep of the first two states on the ballot. Which moves everything to Nevada, which has a huge non-white Hispanic voting block that will push Biden’s apparent advantage to its absolute edge. All of this sets up a scenario where Sanders could feasibly win the first three states in the election, and then what? The biggest and most enthusiastic base of any candidate springs into action with the power of belief behind them, and with good evidence for the rest of the country that Sanders is legit. Plus, they can point to the countless polls showing Sanders mopping the floor with Trump in a general election. Would I bet against that? Unlikely.

Is there a lot of conjecture here? Of course. We’re months out from Super Tuesday and states worth hundreds of delegates necessary to win the nomination haven’t even been polled yet. As FiveThirtyEight said, there is a giant “black hole” of what we know after Iowa, New Hampshire, Nevada and South Carolina. But timing is everything, and seven weeks out from the first ballots being cast Sanders is trending in the right direction while Warren is slipping in the polls, and the biggest thing standing in his way is a moderate, establishment Democrat that seems out of step for a moment being seized by populism and the progressive base of the party.

Don’t be shy to write in! Simply reply to this email and send in a question of your own, or tweet at Tangle: @TangleNews

Q: I've wondered how to better/more responsibly consume more international news and if you have any tips for that? It feels as an American the rest of the world is often subject to following our politics as a result of our global political position, but that shouldn't be a one-way street.

Tangle: Kudos to you for caring enough to consider this. I think consuming international news, especially given how global our economy and country has become, is really important. I also think it’s valuable to consider thoughtfully the places you get your international news from. My overarching guidance would be to read local journalists as much as you can. The issue, of course, is that you often won’t speak the language stories are written in. But Google translating articles online is a totally viable way to get an idea of what’s going on — and most big news organizations, even in foreign countries, translate splashy news stories into English.

Short of that, here are a few general tips worth considering:

For the first time since the middle of the last century, more Americans are dying at home than in hospitals. The trend reversal is a sign of a new romanticized death, where people would rather be in the comfort of their home than under the unfamiliar, buzzing fluorescent lights of a hospital room. But it’s also a sign of the times: hospitals have the financial incentive to send terminally ill patients home with their families, even if they are wholly unprepared to care for them. And in-home hospice care is a booming business that is more common than its ever been. You can read more here.

Hi there! This is actually a trick post to see how many Tangle readers read this far in today’s newsletter. I’m always curious about what sections Tangle readers enjoy and how far they go in the newsletter. I thought this would be a fun way to find out. To show me you read this far, all you have to do is click the button below (it’ll take you to a poll, but you don’t need to fill it out: Substack will tell me how many people clicked the button).

Tangle is indie and ad-free. That means it only grows with support from its readers. Please consider forwarding this email to friends or colleagues to spread the word. You can also share a link to Tangle on social media.