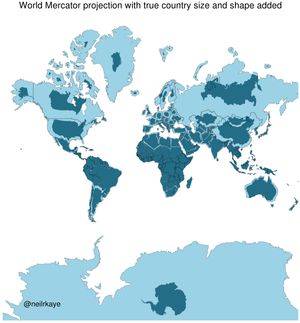 Reminder: Tangle gets sent out Monday through Thursday, around lunchtime. So you won’t hear from me again until after the weekend. Be sure to send in some questions by replying to this email and I’ll try to get them next week.

In my haste to get the newsletter out yesterday, I forgot to include my patented feel-good story to wash down all the craziness. I’m sorry for letting you down. I also spelled “dissent” like “descent” and felt an unbearable shame I won’t soon shake.

Israel bans Tlaib and Omar, our first-ever guest response, and Facebook is listening to you.

A jarring map shows the real size of countries in relation to each other. The light blue is the traditional Mercator map that you probably learned from in school. The dark blue is those countries scaled to an accurate, relative size. What popped out to me: the continental U.S. is basically the size of Brazil. h/t Reddit.

Yesterday, several officers were shot during a drug bust in Philadelphia. My heart sank and my stomach turned when “active shooter” news alerts broke about my hometown. Sending healing vibes and hope for change to one of America’s greatest cities.

Rep. Ilhan Omar and Rep. Rashida Tlaib. On Thursday, stories broke that the two representatives would be barred from entering Israel. President Trump expressed support for the decision, claiming on Twitter that they “hate Israel and all Jewish people.” The two representatives, who have been critical of Israeli government, were planning a trip to visit the West Bank under the guidance of Hanan Ashrawi, a Palestinian lawmaker who has played a major role in Israeli-Palestinian peace negotiations. As rumors circulated that Israel would bar Tlaib and Omar from visiting,  Republican leaders, Trump’s press secretary and the Israeli ambassador to Washington D.C. insisted they were untrue. Then Trump tweeted and Israeli officials confirmed it was real.

What are you afraid of? Rep. Omar and Rep. Tlaib are democratically elected representatives, and Tlaib’s own family is Palestinian. Denying them entry to an allied nation is as undemocratic as it gets and only makes it seem like Israel has something to hide. In fact, many Democrats are saying just that: the whole situation proves out Tlaib and Omar’s perception of Israel. It’s an attempt at humiliating the only two Muslim women in Congress and it is a perfect example of how Israel dehumanizes Muslims or Palestinians. It’s also totally unprecedented.

You reap what you sow. Omar has spent the last few years saying or tweeting anti-Semitic things, and now she wants to come to Israel and use her visit to make the government look bad. Why would Israel let her in? Also, both Omar and Tlaib have supported boycott movements against Israel, hoping to punish the country economically for what they believe is its unjust treatment of Palestinians. Now Trump and Netanyahu made boycotting Israel easier: You’re now not allowed in. As for being “unprecedented,” ever heard of Keith Ellison? He’s the Muslim Representative who tried to bar a democratically elected Dutch official from entering the U.S. for his views on Islam in 2015.

Politically, it’s a dumb move by Trump and Netanyahu. Rejecting their visit after Republican leaders, your own press secretaries and the Israel-aligned U.S. ambassador said they would support a visit from Omar and Tlaib is just bad politics. It makes it clear this move is Netanyahu kowtowing to Trump, and for what? Omar and Tlaib are divisive in their own party already, and Trump is — once again — giving Democrats a reason to coalesce behind them. It’s just like the “go back” to your country moment from a few weeks ago. Democrats are going to come out in droves supporting Tlaib and Omar, as will a few Republicans, and the result will be Israel looking like it’s trying to cover something up and Trump wasting his time on another petty personal disagreement. Also, if Israel caves and eventually lets Tlaib and Omar in, their visit will get ten times the press it would have gotten otherwise. That’s going to be a major platform for them to tell the story they want to tell about Israel. Look no further than the CEO of the American Jewish Committee, David Harris, who is a pretty center-right observer and has repeatedly taken hard lines criticizing Omar and Tlaib.

Also, here is The Jerusalem Post’s editor in chief:

Reminder: Tangle is about repairing the relationship between reporters and readers. Simply reply to this email to submit a question and I’ll get to it in an upcoming newsletter.

Today we have our first-ever guest response. Matt Fuller, one of the best congressional reporters in the game, is tackling a question from Jeff in Aston, PA. Matt has a reputation for accurately predicting vote counts and some pretty hilarious interactions with members of Congress that he often shares on Twitter. He knows D.C. as well as anyone. You can follow him here.

Q: I have a question I've asked of those who run other newsletters (Axios AM, Popular Information) but I haven't gotten a fulsome answer: how is it that the Senate Majority Leader can prevent legislation passed by the House from EVER being given a vote or even debate? Perhaps more importantly, what would be the process to change this dynamic?

Senators have generally given up some of their power to set the debate in order to make the Senate, ironically, function. This is from a CRS report on the Legislative Process on the Senate Floor:  “Senators relinquish their equal right to recognition and their right to make certain motions, and they do so in order to lend some order and predictability to the Senate’s proceedings. Otherwise, it would be nearly impossible for any Senator to predict with assurance when the Senate will be in session and what legislation it will consider.”

Theoretically, any Senator could make a motion to bring up a bill. But because of Senate precedent — and the majority’s interest in controlling what gets a vote — lawmakers would simply move to table the measure, effectively killing it. It’s a Senate tradition that gives the Majority Leader his agenda-setting functions. And to take them away, you’d need 51 votes. Obviously, Republicans want McConnell to have that power. But there also might be a number of Democrats who want to maintain ~the Senate norms~.

I imagine a vote trying to usurp the Majority Leader’s ability to decide what bills are taken up would go two ways: the first is overwhelming defeat (I’m thinking about a rogue Senator trying to bring up his own bill), and the second is a party-line vote (let’s imagine that Schumer organized the Democrats to all vote to bring up a background checks bill on guns). Either way, they don’t have the votes. Even if Democrats all took turns trying to bring up the bill — there’s a similar tactic in the House called a “conga line” — it wouldn’t be effective.  The Senate Majority Leader could also put an end to such a tactic rather quickly, simply by seeking to be recognized. The Senate Majority Leader is recognized first when he wants to speak, and that’s actually foundational to the Majority Leader’s tight grip of the chamber.

You see, the other way in which the Majority Leader controls what legislation gets a vote is with amendments. This one’s actually a little trickier, but it has to do with “filling the amendment tree.” Again, because the Senate Majority Leader is recognized on the floor first, he has an opportunity to offer all the amendments allowable to a bill, thus stymieing other Senators from offering their own amendment. In our current Senate, McConnell typically offers shell amendments that can be modified with actual text. So you may see McConnell offering three amendments that are basically blank placeholders for a future agreement with Democrats or other Senators. But once again, to discontinue this Senate practice, you need 51 votes. (Essentially, a Senator would offer an amendment to be considered, the presiding officer would refuse to consider it because the amendment tree has been filled — which prevents new amendments from being added until the earlier amendments are dispensed with — and then the Senator would appeal the ruling of the chair. This is basically the process for “going nuclear” in the Senate — with some steps left out because this is already a long and complicated answer.)

There’s really no way to change this without 51 votes in the Senate. And unless you can convince Republicans to act against their own self-interest for the good of minority rights, there’s really not much Democrats can do, outside of the public pressure campaigns they’ve already taken, against a man who famously relishes in Democrats hating him.  Welcome to ~The World’s Greatest Deliberative Body~.

Another one bites the dust.

Colorado Gov. John Hickenlooper will drop out of the presidential race today, a source close to the campaign told the Associated Press. Gov. Hickenlooper was a moderate Democrat warning about the dangers of partisanship. He got rich after founding a series of brewpubs. Rumors are he may now challenge Republican Cory Gardner in a senate race.

Since you love conspiracies.

The autopsy report on Jeffrey Epstein found that he had a broken hyoid bone in his neck, near the Adam’s apple. Via The Washington Post (emphasis mine): “Such breaks can occur in those who hang themselves, particularly if they are older, according to forensics experts and studies on the subject. But they are more common in victims of homicide by strangulation, the experts said.” If you thought those conspiracy theories might die quietly, think again.

Facebook is transcribing the audio it picks up from your cell phone. That’s according to Bloomberg, who got several of the transcribers to tell their stories anonymously. Facebook also didn’t deny the charges, though they deflected by saying, “we paused human review of audio more than a week ago.” Apple and Amazon have both come under fire for similar practices. Check the settings on your phone, ‘cause that mic is live. Read more here.

Number(s) of the day.

In a Fox News poll, 90 percent of Americans said they support requiring criminal background checks on all gun buyers.  81 percent support passing "red flag" laws that allow police to take guns from people shown to be a danger to themselves or others. 67 percent support banning assault rifles and semi-automatic weapons.

Have a good one.

A Canadian energy company says it turned five tons of plastic waste into thousands of gallons of diesel and fuel in a single day. No, that’s not a typo. Sparta Group has a patented process it calls “Phoenix” that can take single use plastic bags and Styrofoam, heat them up in an oxygen-free environment, and then capture the gas and turn it into liquid that is used for fuel. The Sparta Group president says they are already using the plastic-turned-fuel to run their own trucks. You can read more here.

Were you forwarded this?

Press the button below to subscribe. Then, tell your friends.