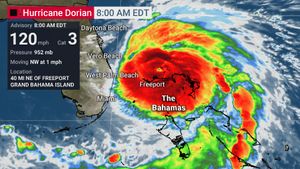 Tangle is an independent, ad-free, non-partisan politics newsletter where I answer reader questions from across the country. You can subscribe by clicking below.

It’s been a long holiday weekend and there’s a lot that’s happened. I’ll try to cover all the bases of what you need to know.

I’m here for you. Simply reply to this email and send it in, then I’ll try and get to it this week.

Image of the day.

Hurricane Dorian. It’s the largest storm of the year and one of the strongest on record in the Atlantic. It made landfall in the Bahamas as a Category 5 storm and has now been downgraded to Category 2, but it’s growing in size. The biggest issue, though, is that the storm has stalled out over the Bahamas. It’s unusual for a storm this big to be moving so slowly, but at just 1 mph the storm’s crawling speed is wreaking havoc with sustained wind, rains and floods. Experts on the ground say this storm could reshape the Bahamas for decades. Now it’s headed for the east coast. 20 or 30 years ago, natural disasters like this were not typically a partisan event. But in today’s day and age, politics play a part…

It’d be nice to have a competent leader right about now. On Sunday morning, Trump tweeted out a warning about Dorian that said Alabama would be hit “much harder than anticipated,” among a few other states. Alabama, though, is not supposed to be hit by the storm. Democrats quickly seized on this false warning, pointing to local meteorologists and even the Alabama branch of the National Weather Service (that’s a federal agency) who had to correct Trump’s tweet in real time. ABC White House reporter Jon Karl noted that “Trump misstated the storm’s possible trajectory” on national television, which threw gas on the controversy. Other Democrats used the opportunity to claim that climate change was worsening storms like Dorian because the warmer waters were slowing down storms and causing increased rainfall during hurricanes.

Better safe than sorry. Most Republicans brushed off the misstep and blasted Democrats right back for politicizing a moment that called for unity. Several of the states in the path of the storm are led by Republicans who just want to communicate  accurate information to their constituents. President Trump responded with vitriol towards Karl, a reporter he’s sparred with on numerous occasions. Part of Trump’s plan for the 2020 election is to de-legitimize reporters and make the “mainstream media” his number one enemy. This was a preview of how he might do that.

As for Dorian and whether the storm is reflective of climate change, Ryan Maue, a great meteorologist I follow on Twitter, offered some sober analysis on what we can glean from a storm like this. Of note, he cautioned not to take a futuristic climate model (i.e. how bad things will be in 2100) and try to apply it today.

We’re living in wild times. Most of the climate change alarmism is about warming surface temperatures, increased droughts and more intense weather. But the thing that has always scared me most is the warming of ocean water. So much life exists in the ocean, and so much of our lives are dependent on clean, healthy waters. On top of that, though, is that storms like Dorian will — perhaps now and especially in the future — become more severe due to warmer waters. I don’t know Maue’s political views, but I know he often blasts liberals for inaccurate climate change alarmism. Still, he linked out to the NOAA consensus on how climate change effects hurricanes today and how it will down the road. In that consensus the government says “tropical cyclone rainfall rates will likely increase” due to anthropogenic (human caused) warming, which increases  the moisture of hurricanes. It also says the global proportion of very intense hurricanes (i.e. Category 4 and 5 storms) will likely increase due to anthropogenic warming. Yet, that analysis is a lot more nuanced in the Atlantic, where statistical correlation between greenhouse gas emissions and increased hurricane activity has been found, but lots of other factors unrelated to global warming could be at play. You can read the NOAA’s full analysis here.

On Thursday, I wrote about “Yang vs. Sanders beef.” In that issue of Tangle, I mentioned Yang’s Universal Basic Income, or freedom dividend, which will give $1,000 to every American each month. One reader noted that I wasn’t explicit about an important caveat: the freedom dividend is for every American adult, not just every American, which means family homes will only receive money for the folks over the age of 18. I wanted to follow up and be sure that was clear.

Q: It seems like increasing wealth inequality is a contributing factor to almost every other issue that faces Americans. Is there a reasonable solution to closing the gap that people on both sides could get behind? Has any candidate proposed anything that could reasonably be pushed through?

One group of inequality scholars found that “75 percent of household wealth and 97 percent of capital income — the kind of income generated by wealth, such as dividends, interest and capital gains — is concentrated in the top 10 percent of American households.”

Fixing this inequality would be a complicated, difficult task. But there’s actually been a surprising amount of bipartisan support for addressing income inequality. Most Americans probably think of addressing inequality as a liberal prerogative, but it’s not exclusive to the left. The founding fathers, who conservatives tend to feel a deep sense of connection and loyalty to, were concerned about wealth inequality in the same way they were concerned about limited government. Their solution was simple: land ownership. If Americans owned land, that would keep them civically engaged, keep taxes lower, and keep citizens independent of government assistance. Today, offering land ownership to every American isn’t plausible, but other ideas have caught my eye.

In August, President Trump signed a $717 billion defense spending bill. Buried inside, though, was a provision that made it easier for workers to own a piece of their employer, according to CNN. The provision was added by Democratic Sen. Kirsten Gillibrand, who recently dropped out of the Democratic presidential race, but it had bipartisan support. The bill promotes employee stock ownership plans, or ESPOs, where companies take out loans to buy shares and then divide those shares amongst the employees. One way to close the wealth inequality gap would be if the federal government told companies it would buy goods and services from private businesses that prioritized equity sharing like this.

Another incentive structure that’s been talked about is pushing baby boomers to sell their businesses to employees rather than liquidating them. Economists talk about the “silver tsunami” of baby boomers who are going to retire soon, and many of them are business owners. Many of these businesses are being taken over by private equity firms or competitors, but the federal government could reduce corporate income taxes in exchange for these business owners selling out the company to employees, thus splitting that wealth and passing it on to a larger pool of people. Similar programs have worked in Iowa where Republicans and Democrats have coalesced behind the general idea.

Of course, there’s also Universal Basic Income, which Andrew Yang is running on this year. UBI is less popular across party lines and economists are split on whether additional income will address wealth inequality in a long-term, meaningful way. But Yang has also spoken a lot about public-private citizen trusts like the one in Alaska. There, the Alaskan government pays out dividends from oil and mineral mining profits to every Alaskan citizen. It’s a Republican-designed asset sharing program that’s meant to include every Alaskan citizen in the profits from the state’s natural resources. Other states could construct similar programs based on their economic strengths.

Each of these are viable options. Some are already in motion. The general trend is towards the federal government incentivizing asset sharing and profit sharing programs, and hopes that the private sector will embrace battling income inequality with the realization the economy’s health depends on it. FWIW, a lot of the info here is pulled directly from an excellent Politico piece written by a few top economists (though the ideas there and here have been discussed broadly in different economic and political circles). You can read that story here.

Late last week, President Trump fired his longtime assistant Madeleine Westerhout. The news shocked the journalism world, as most reporters know Westerhout to be the unbreakable right hand of Trump. She’s a loyal confidant who seemed in it for the long haul. But, apparently, Westerhout had a few too many drinks at an off-the-record event with reporters and spilled the beans that Trump didn’t like being in pictures with his daughter Tiffany because he perceived her as overweight. Westerhout also bragged that she had a better relationship with Trump than his own daughters. Off the record events like this are common when presidents are traveling, but this time the comments leaked. Conservatives said reporters “burned” Westerhout for sharing her comments. Trump tweeted veiled threats. Then, when he was asked by a reporter if he’d spoken to Tiffany, Trump said he was planning to call her. Liberals immediately seized on that response as proof that Trump was heartless, since he hadn’t even checked on his daughter after such an ugly story had been published.

The Justice Department’s internal investigator released a report on Thursday that sharply criticized former FBI Director James Comey for leaking internal FBI memos to the press in 2017. Comey’s memos summarized conversations he had with President Trump and painted him in a very negative light. “Members of Comey’s senior leadership team used the adjectives ‘surprised,’ ‘stunned,’ ‘shocked,’ and ‘disappointment’ to describe their reactions to learning that Comey acted on his own to provide the contents of Memo 4, through [lawyer Daniel] Richman, to a reporter,” Inspector General Michael Horowitz’s report on his actions said. The DOJ concluded that Comey did not do anything warranting criminal persecution, but Horowitz says it set a  “dangerous example” for other members of the FBI. He also determined Comey leaked some classified information.

A Trump labor appointee was forced to resign after Bloomberg wrote a piece about his “anti-Semitic Facebook posts.” But the posts in question were clearly in jest, as the appointee — Leif Olson — was sarcastically mocking the alt-right and anti-Semitism. The reporter behind the post offered a mix of explanations, but none change the fact Olson — who just moved his family across the country for the job — is now out of a gig. Screenshot below.

A mysterious vaping illness is leaving lots of people very, very sick. More than 215 patients have had mysterious and life-threatening illness related to vaping, and doctors say it’s “becoming an epidemic.” The patients are typically in their late teens or early 20s, otherwise healthy and use e-cigarettes or marijuana vapes. You can read more about what we know here.

If you are seeking shelter in the southeast United States, there’s a good chance Airbnb can help you out. The rental home service has a program called Open Homes that coordinates hosts to provide free housing for people seeking shelter during disaster events. If you need a place to stay, follow this link.

Tell your friends about Tangle and ask them to subscribe.