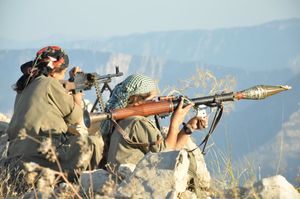 This is an excerpt from Tangle, an independent, ad-free, non-partisan politics newsletter. It’s a less-than-10-minute-read that gives you all you need to know about the day’s news with perspectives from every side. I also answer reader questions. You can subscribe below.

Today’s question is going to be answered by Ben Van Heuvelen, the Editor in Chief of the Iraq Oil Report. Ben is a dear friend and coaches my ultimate Frisbee team — and now he’s the second-ever guest respondent in Tangle. He’s also one of the foremost experts on Iraq and the Middle East, and his website is a gold mine of information for what’s happening in the region. I sent Ben your question, his response is below…

Ben Van Heuvelen, on behalf of Tangle: There is no way to answer this question without giving a lot of context, so I apologize in advance for a long and winding reply.

First, it's helpful to define "the Kurds": an ethnic group numbering about 40 million people who live mainly in northwestern Iran, northern Iraq, southeastern Turkey, and northern Syria. Kurdish people are a minority group in every country where they live. Many Kurds nonetheless think of the contiguous Kurdish areas in Iran, Iraq, Turkey, and Syria as "Kurdistan" -- a stateless, Kurdish nation. For more than a century, various political groupings of Kurds have fought and struggled to establish their own state.

One of these groups is the PKK (an acronym that, translated from Turkish, stands for "the Kurdistan Workers' Party"). The PKK has been fighting a guerrilla war against Turkey since the 1980s. Their goal is to establish an independent Kurdistan, including by carving out a section of southeastern Turkey. Pitted against a far superior power -- the Turkish military -- the PKK has used asymmetric warfare to level the playing field, including tactics that any reasonable person would define as terrorism. Turkey calls them terrorists, and the U.S. government officially lists them as a terrorist organization as well. The PKK is also pretty cultish: they have a Marxist-inspired ideology that is often romanticized by Western reporters, but they are fanatical about that ideology. For example, once you join the PKK you can't leave. (Or, if you do leave, you should be concerned that they might try to kill you.)

The PKK started in Turkey, but it has affiliate groups throughout Kurdistan. In the mountains of northern Iraq, they also call themselves PKK. In Iran, the call themselves PJAK. In northern Syria, it's PYD and/or YPG. A big alphabet soup of acronyms. But the key thing to understand is they all hero-worship Abullah Ocalan, the founder of PKK, who is currently in a Turkish prison.

The U.S. has been allied with the Syrian affiliates of the PKK. Why?

To answer that question, we have to go back to the early-ish days of the Syrian civil war. All of that chaos enabled ISIS to flourish, and the U.S. was looking for allies on the ground, so that America wouldn't have to send tens of thousands of its own troops to fight ISIS. In my view, this is one area of foreign policy that President Obama really screwed up. For a short time, there was a Free Syrian Army that could have become a pretty good, largely secular ally -- against both ISIS and Assad -- if the U.S. had committed lots of weapons and air support. But Obama was reluctant to get the U.S. involved in another foreign war. And because Obama dithered, the FSA, as a matter of survival, had to cultivate other alliances against Assad and ISIS. Those allies included Muslim Brotherhood types as well as Nusra Front, which was the Syrian affiliate of al-Qaida. As soon as Nusra was involved with the FSA, the U.S. couldn't help out because they'd essentially be arming al-Qaida.

So the Obama administration decided the new least-worst option was to strike up an alliance with the Syrian Kurds. By far the most powerful fighting force was the PYD/YPG -- that is, the Syrian branch of the PKK. On one level, this made a lot of sense: if you have to choose between a group of overzealous freedom fighters and an apocalyptic terror army hell-bent on destroying Western civilization, you choose the freedom fighters. Nonetheless, this put Obama in an awkward spot, because Turkey is a NATO ally, which means there's a mutual defense treaty. How could the U.S. partner with a group the U.S. officially acknowledges is propagating a terroristic war against Turkey? The solution was distinctly American: branding! The U.S. government started pretending that YPG/PYD was a different entity from the PKK, and they also started calling them the "Syrian Defense Forces." By any honest reckoning, though, the brunt of the SDF's fighting has been done by Syrian Kurds who follow Ocalan. So, on one level, Turkey had a very valid complaint.

With all of that being said, we should also be skeptical of Turkey's position. President Erdogan talks passionately of Turkey's right to defend itself against a separatist, terrorist organization, but what he always neglects to mention is that the PKK has shown real willingness to engage in a peace process. There was a formal ceasefire between 2013 and 2015. Erdogan essentially blew up that peace process because of a political calculation: at the time, he was trying to rewrite the Constitution and move Turkey toward a more authoritarian structure, and he needed the support of the country's far-right, ultra-nationalist (and strongly anti-Kurdish) party. In essence, he prioritized his personal quest for power over a process that would have given Turkey's Kurds a meaningful political voice and greatly reduced the impetus behind the PKK's armed struggle. Now he has imprisoned the most popular Kurdish political leaders, even though they have no apparent affiliation with the PKK. So, yes, the PKK and its Syrian affiliates do pose a violent threat to Turkey -- but that's a problem largely of Erdogan's own making. He has removed all avenues for Turkish Kurds to pursue their goals through politics.